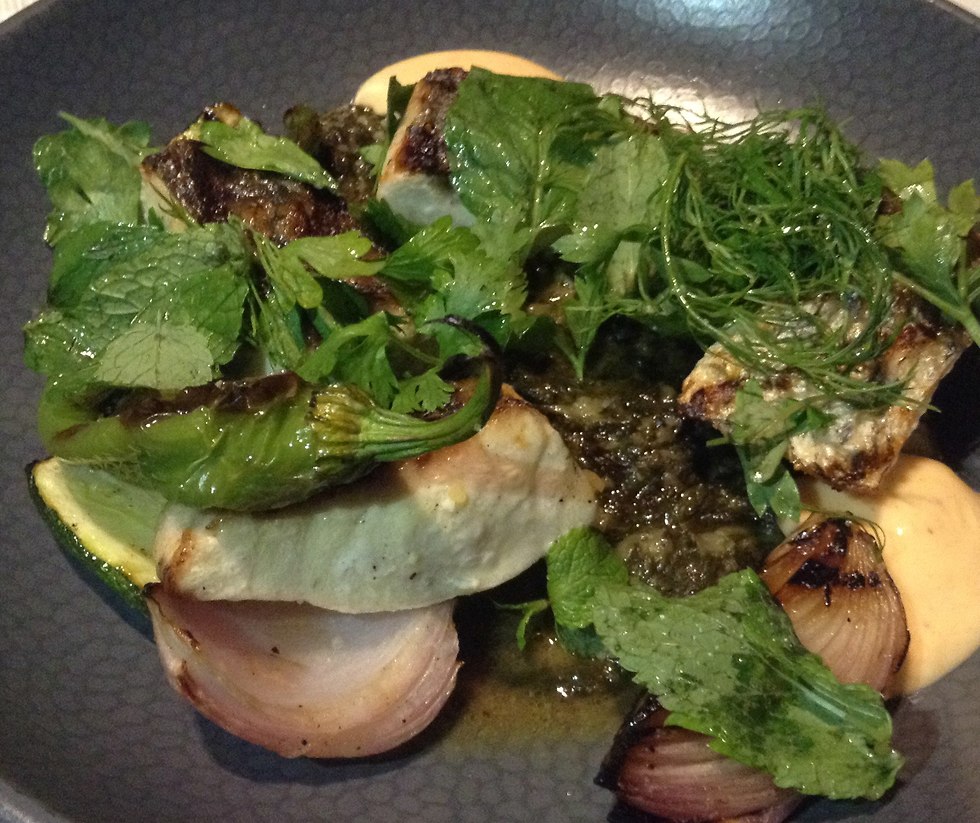 Review: Deca, an elite Mediterranean fish restaurant headed by chef Ilan Mizrahi, remains at the top of a culinary niche it pioneered just over a decade ago—fine dining that is certified strictly kosher and serves no meat or poultry, ideal for vegetarians.

Hidden away on a tiny side street on the southern edge of downtown Tel Aviv is a restaurant whose modern, spacious décor belies an understated elegance, as well as faultless attention to detail: the lighting is just right— bright enough to read the menu easily, but dim enough to convey a sense of intimacy—while the soundtrack—tasteful “golden oldies”—plays at exactly the right volume.

The description printed on the restaurant’s paper napkins—provided in addition to starched cloth napkins—reads “elite Mediterranean fish restaurant,” which admirably sums up the restaurant’s cuisine. Helming the kitchen is new chef Ilan Mizrahi, who graciously offered to prepare us a tasting menu of Deca’s classic dishes, as well as few ones being introduced this month.

A meal at Deca starts with complimentary house bread and butter, or one may order focaccia, which comes with an array of dips, of which the rich, creamy ikra is the best.

Even before commencing on the food, however, it is worth perusing the list of seven specialty cocktail, because there are some real winners there. For example, the Appletini—a mixture of Martini Bianco, Calvados and apple juice, garnished with slices of fresh apple and, surprisingly, radish—is fruity and refreshing, while the Jungle Vibe—rum, Martini bitter, lemon juice, orange juice and, unusually, hyssop (za’atar)—really packs a punch.

The main menu comprises three sections: starters, intermediate courses and main courses. First, however, we were served an interesting amuse bouche called "Pani Puri"—raw salmon with ginger and mint, encased in crispy round shells inspired by Indian cuisine. Each bite resulted in a tiny explosion of flavor; unfortunately, it was all gone in just a few bites.

As a kosher restaurant that serves no meat or poultry, Deca’s starters and main courses, not surprisingly, revolve around fish and pasta, often in combination. Nevertheless, several of the pasta dishes, as well as salads, are ideal for vegetarians.

Our first starter was, according to the manager, one of the restaurant’s most popular dishes: gnocchi with almonds and pine nuts in cream sauce. The tender potato pasta–in a delectable, cheesy sauce with shallot, sage and honey–was certainly as good as any to be found in an Italian restaurant. Second was drumfish sashimi on freekeh salad dressed with burnt labaneh. The fresh raw fish with vegetable-studded smoked wheat and distinctive dressing added up to a wonderful interplay of flavors, while a hint of chili left a pleasant tingle of heat in the mouth.

The intermediate course was sea fish massabha—herbed white bean cream topped with morsels of mild ceviche, pickled zucchini, a quail egg and scatterings of cooked and raw chickpeas, served with a grilled bruschetta. From the expert seasoning to the crunch of raw kernels, this variation on a hummus theme was a truly winning combination.

Our main courses were both fillets of local fish, prepared in creative ways. First came a new dish that will make its way onto the lunch menu in October: grilled mullet (burri) served on black beans and carrot cream—an entrée that was as pleasing to the eye as it was to the palate.

(Photo: Buzzy Gordon)
The drumfish, meanwhile, was served with spinach and grilled vegetables in an exotic and piquant pickled lemon yogurt sauce. Fortunately, the thick steaks of white fish were able to stand up to the spicy sauce, resulting in an excellent dish.

Deca boasts an impressive international wine list, including its own red and white private label house wines, as well as featured “wines of the month.” These are the only wines available by the glass, but the restaurant is very generous when it comes offering tastes before you order.

We also could not resist the dessert called "Spring": a white chocolate tart with cherry ganache, mousses of white chocolate and passion fruit-pineapple, macaroon crumbles and pineapple sorbet. The tart was actually cake that melted in the mouth, while the fruit elements constituted marvelous counterpoints.

Even though we could have washed our desserts down with coffee or cappuccino made with real cream, the tea menu was too intriguing to pass up. Of the four infusions available, we had the Moroccan Mint and Forest Berries, both of which we enjoyed very much.

Throughout our meal, the service was impeccable. As it drew to a close, the waiter poured warm water on towelettes, and then wrung them out tableside, handing them to us with tongs—a ceremonious touch we had not witnessed in any other upscale Israeli restaurant. Deca also pampers its customers with a private parking lot, where parking is complimentary—a welcome bonus in downtown Tel Aviv. This is also one of the features that renders the restaurant eminently handicap accessible. Deca. Kosher (mehadrin). Hata’asiya St. 10, Tel Aviv. Tel. (03) 562-9900