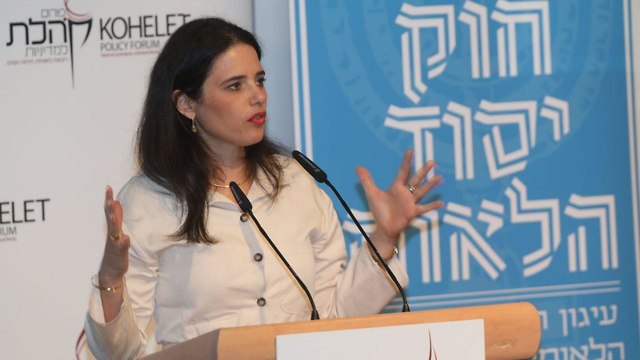 Eight petitions have been filed to HCJ demanding it to strike down the contentious law; any interference by the court would be 'foolish' and 'dangerous,' justice minister says.

Justice Minister Ayelet Shaked on Tuesday once again warned the High Court of Justice not to interfere in the Knesset's legislation of Basic Laws, particularly the controversial Nation-State Law, saying such an interference would be "foolish behavior."

Eight petitions have been filed to the High Court of Justice demanding it to strike down the contentious law, and Shaked has already warned any intervention by the court would lead to a war between the judicial and legislative authorities.

Justice Minister Ayelet Shaked
Such interference by HCJ justices "is dangerous and is liable to topple any regime element," Shaked said at a conference Tuesday organized by the Kohelet Policy Forum. "In a democracy, the court is not part of (writing) the constitution." The justice minister argued that the High Court striking down Basic Laws would undermine the state's democratic foundations and the principle of the separation of powers, "for the sake of a constitutional illusion, something that doesn't exist—all to save us using a cure that won't help against an illness that won't come." She also rejected the claim by former High Court chief justice Aharon Barak, who said he adopted the mechanism of striking down laws from America law. "There's nothing like this situation in the world... In every other country there is an agreed upon constitution, and the new authority the court took upon itself was to reject, based on that constitution, laws that contradict it. But we never had an agreed upon constitution," Shaked explained. Opposition leader Tzipi Livni, who spoke at the conference after Shaked, slammed the justice minister and accused her of trying to undermine the Declaration of Independence. "What was good then (when the declaration was signed), should be good for the Israeli government today as well. And if the government is incapable of voting in favor of that, then we truly did lose Zionism," Livni said.

Livni went on to lament the fact there's an argument over the question "what is democracy."

"When the justice minister claims democracy is the majority rule and that's it, then we have a fundamental problem in the perception of democracy," she said.

Tourism Minister Yariv Levin also spoke at the conference, calling on the HJC to reject all petitions currently being considered against the contentious law.

“We’re witnessing a new era where a minority is trying to forcefully repeal the law despite the needs of the majority of the population and despite the mechanisms of the democratic regime. I am calling on the HCJ judges to reject all petitions against the Nation-State Law, all the way,” he exclaimed.

Speaker of the Knesset Yuli Adelstein, said at the onset of the conference the notion that the controversial law is racist or nationalistic is incorrect.

Speaker of the Knesset Yuli Adelstein

“The opponents of this law have found it fascist, racist and nationalistic. The truth is that the law is 180 degrees the opposite of that. I know this because I grew up in a country where human dignity gets trampled on. I cannot be suspected of lending my support to the law that would destruct democracy,” Adelstein vented.

"This law does not intend to turn the nation-state into a state solely for Jews, but rather to defy its non-Jewish citizens," said Yuval Diskin, former Shin Bet chief.

“The law tries to propose a magic solution to preserve the State of Israel as Jewish, but it undermines the state’s existence as a democratic state. It is not the law that will preserve the Jewish nature of the state, but only the Jewish majority living here," Diskin stressed.

Former Justice Minister Haim Ramon who also spoke at the conference said that "The Nation-State Law is not meant to abrogate the Basic Law: Human Dignity, rather to stress the fact the State of Israel is the national home to the Jewish people."

"If the center-left bloc was to lose in the upcoming elections, it would be because it has blurred the line between the Zionist Left and the non-Zionist Left. This will take a heavy toll at the ballot box," Ramon explained.

Since its approval in July, the controversial Nation-State Law has sparked uproar.

The law enshrines the status of the State of Israel as the nation state of the Jewish people, declares that only Jews have the right of self-determination in the country, defines Jerusalem as Isreal's capital, Hebrew as the official language, establishes that the state will be open to Jewish immigration and stresses the connection between the state and the Jewish Diaspora as well as the importance of preserving Jewish culture and history.

Before and after the approval of the law, opposition members as well as Israel's minorities headed by the Druze community launched a high-profile protest against it, claiming the Nation-State Law is discriminative and racist.