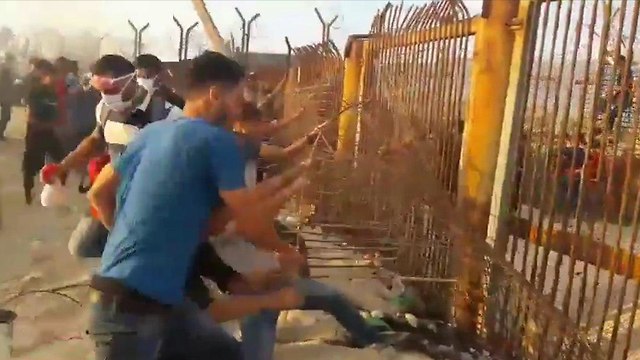 The IDF published Tuesday footage of the Gaza security fence breach, showing a Palestinian rioter setting fire to an abandoned military post near the fence. The IDF's documentation was released almost 24 hours after a video of the incident was distributed by the Palestinians.

The unusual incident took place during the violent riots along the northern Gaza border fence on Monday, which were attended by thousands of Palestinians. During the disturbance, Palestinian rioters caused damage to the security fence in the Palestinian side and set it on fire.

The IDF Spokesperson's Unit said that the fire in the military post was immediately put out, and no casualties were reported.

The Palestinian video of the events shows several Palestinian rioters sabotaging the border fence near Kibbutz Zikim and breaching it.

According to the IDF Spokesman's Unit, "the incident was observed and controlled by the IDF and at no point did it get out of hand. The troops responded with crowd dispersal measures and live fire, in accordance with the rules of engagement."

Eleven rioters were wounded from IDF fire, according to the Gaza health ministry.

During the riots, a relatively unusual incident occurred when a grenade exploded in the hand of a Palestinian who tried to throw it at IDF soldier. The Palestinian holding the grenade and others in the surrounding area were injured as a result.

Meanwhile, several dozens of vessels sailed Monday from Gaza's shores towards Israeli waters in an attempt to break the naval blockade imposed on the strip. The Palestinians also set fire to tires placed on rafts in the water.

This was the 11th flotilla that was launched as part of the "March of Return" campaign.

At the height of the violent clashes Monday, some 5,000 Palestinians were rioting by the border fence, throwing explosives, grenades and stones at IDF soldiers, and setting fires which caused thick black smoke to cover the area.

Eleven rioters were wounded from IDF fire, according to the Gaza health ministry.

"If Hamas thinks that as a result of this plight it can attack Israel— it will be making a major mistake. Our response will be harsh, very harsh. I hope that it is possible to halt this strangulation but I also reiterate that Israel will act with all necessary strength to defend itself and its citizens," Netanyahu stressed.

"The situation in Gaza may be divided in two. First, the permanent effort by Hamas to arm itself and organize against Israel. Second, in the last year Abbas has made the situation in Gaza more difficult by choking off the flow of funds from the Palestinian Authority to Gaza," he explained.

"Abbas has interfered in all UN attempts to ease the plight in Gaza, including now. Many countries, today I can say that even the donor countries are condemning him for this, and rightly so," the prime minister added.