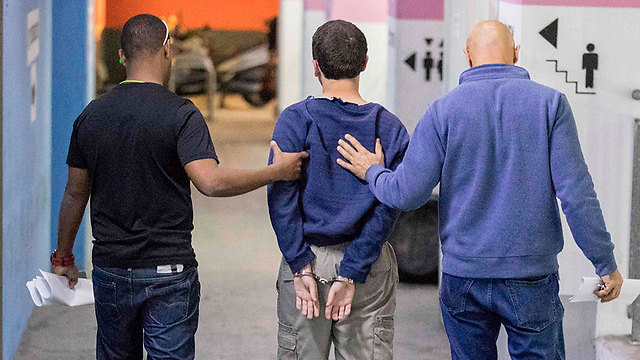 A 19-year-old Ashkelon resident convicted of thousands of counts of extortion and making false statements— after terrorizing airlines and institutions around the world—is in trouble once again; after failing to escape a prison service's vehicle, he claims bombs were planted in various Israeli schools and hotels.

The cyber department of Israel's State Attorney's Office submitted to the Tel Aviv Magistrate's Court Thursday another indictment against a 19-year-old convict from Ashkelon, for attempting to escape custody, extortion, making false statement, and other offenses.

The defendant's name has not been cleared for publication.

As early as April 2017, when he was 18, he was indicted in the United States and Israel for making thousands of threatening phone calls and bomb threats to various institutions and venues across the world. The case is still underway.

The defendant, in the middle, being carried away after a court hearing (Photo: AFP)

Since then, the individual keeps getting into trouble, this time for attempting to flee custody in June 2017.

According to the new indictment filed by attorney Yoni Hadad, at a detention center, while the defendant was getting ready for a prearranged examination, he wore four pairs of socks in order to keep his leg shackles from tightening around his legs and be able to free himself.

The hacker hauled back after being caught    (צילום: מוטי קריסטל)
X

The hacker hauled back after being caught

On  his way back to the detention center the felon apparently succeeded in opening one of his leg shackles with an improvised lock pick and broke out of the vehicle.

Two Israel Prison Service (IPS) officers immediately gave chase and managed to tackle and drag him back to the detention center with a different vehicle.

In addition, even inside the detention center, the defendant kept making threatening phone calls and bomb threats to various institutions and schools.

(Photo: Yariv Katz)
In April 2018, while still in custody, the defendant collected phone numbers of schools, shopping malls and hotels, and concealed them in his cell. He then fraudulently obtained the telephone subscription of one of his fellow prisoners to call two elementary schools and claim he had planted bombs inside. Following his threats, the students were evacuated and police and sappers were called to the scene.

In a different case, the defendant called a hotel in Eilat and informed the security officer that a bomb had been placed in the hotel and that it would soon explode. Again, the police forces were called to the scene.

The primary and main case against the defendant has been going on for more than a year before Tel Aviv District Court Judge Zvi Gurfinkel. The defendant was charged with carrying out a long list of threats and intimidation against more than 2,000 institutions around the world: airports, airlines, schools, Jewish institutions, police stations and individuals.

Bomb threat on Delta Airlines in 2015

The court has already determined that he committed all the offenses attributed to him while he was an adult. As for the acts he allegedly committed while he was still a minor, he has not yet been convicted.

The defendant remains in custody until the conclusion of his main trial.