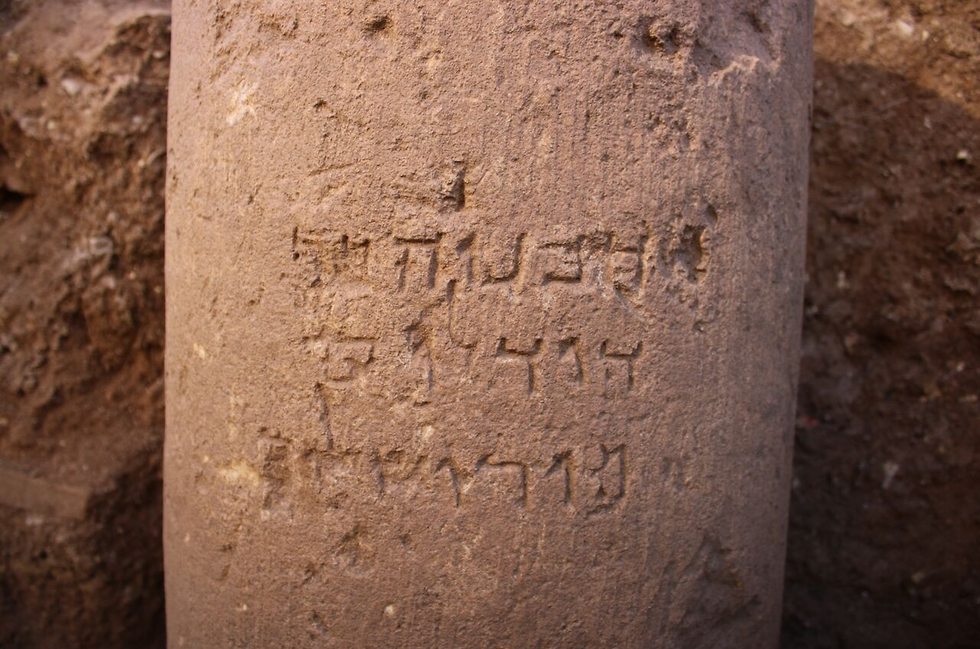 The Second Temple-era inscription was discovered during excavations near the International Convention Center in the capital, and reads: 'Hananiah son of Dodalos of Jerusalem'; 'it is likely that he was an artist-potter,' said exhibition curator.

An exciting find from Jerusalem was presented to the public for the first time last week: a unique stone inscription dating to the Second Temple Period (First Century CE), mentioning Jerusalem in Hebrew letters and using the spelling as we know it today.

The inscription is now on display to the public at the Israel Museum in Jerusalem as part of a new exhibition presenting unique artifacts from the capital.

The stone inscription, as it was found in the excavation. (Photo: Danit Levy, IAA)
During the excavations, the foundations of a Roman structure supported by columns were uncovered. The most important discovery was a stone column drum, reused in the Roman structure, upon which the Aramaic inscription appears. The inscription is written in Hebrew letters typical of the Second Temple Period, around the time of Herod the Great's reign, and reads: "Hananiah son of Dodalos of Jerusalem." "As a resident of Jerusalem, I am extremely excited to read this inscription, written 2,000 years ago, especially when I think that this inscription will be accessible to every child that can read and uses the same script used two millennia ago," said Prof. Ido Bruno, director of the Israel Museum. “The important and interesting cooperation between the IAA and the Israel Museum, brought to light in the handling and display of new finds, provides an opportunity for the public to be exposed to important discoveries from all over the country, learning about the ancient cultures that developed in Israel over generations," he added.

Dr. Yuval Baruch, Jerusalem Regional Archaeologist of the Israel Antiquities Authority, and Prof. Ronny Reich of Haifa University, who read and studied the inscription, noted that "First and Second Temple period inscriptions mentioning Jerusalem are quite rare. But even more unique is the complete spelling of the name as we know it today, which usually appears in the shorthand version.

According to Dudy Mevorach, Chief Curator of Archaeology at the Israel Museum, "the archaeological context of the inscription does not allow us to determine where it was originally displayed, or who Hananiah son of Dodalos was.”

However, said Mevorach, “it is likely that he was an artist-potter, who adopted a name from the Greek mythological realm, following Daedalus, the infamous artist. It is interesting that he decided to add his origin from nearby Jerusalem to his family name." In the area of Binyanei Ha'Uma, where the unique find was discovered, excavations have been conducted for many years – most recently by Danit Levy and Dr. Ron Be'eri, of the Israel Antiquities Authority, who slowly exposed extensive portions of a potter's quarter, which produced vessels for Jerusalem for a period of over 300 years, spanning the Hasmonean Period through to the Late Roman era.

The inscription in the Israel Museum exhibition, Jerusalem. (Photo: Laura Lachman, the Israel Museum, Jeruslem)
According to Danit Levy, "This is the largest ancient pottery production site in the region of Jerusalem." In the latter part of the Second Temple period, particularly during Herod's reign, the production was focused on manufacturing cooking vessels. The production installations were found spread across the site, organized into manufacturing units that included kilns, pools for preparing clay, plastered water cisterns, ritual baths, and work spaces for drying and storing the vessels. Alongside the area where the pottery was produced, a small village developed, whose economy was based on pottery production. The pots were sold in large quantities to the population in Jerusalem and its environs, and those arriving at its gates—in particular the pilgrims arriving in the city.

Subsequent to the destruction of Jerusalem in 70 CE, the potter's workshop resumed its activities on a small scale, until the early 2nd Century CE, when the Roman 10th Legion established its workshop on the site, for the mass production of ceramic building materials—rooftiles, bricks, and pipes, alongside tableware, cooking ware and storage vessels, typical of the Roman army.

The legionary kilns and its products are on display in the International Convention Center and at the Israel Museum.