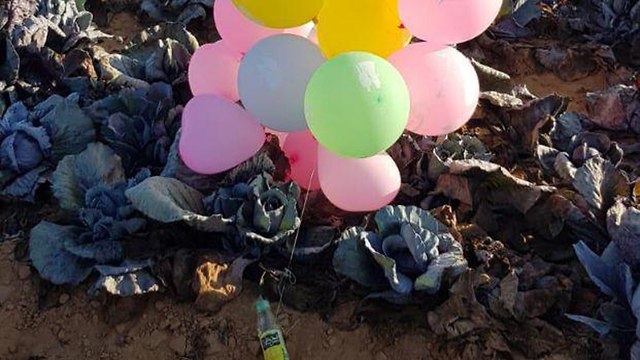 Flammable objects located in Bat-Yam, Rishon LeZion, Modi'in, and Jerusalem; however, some experts doubt they are launched from Gaza; security officials are seeking suspects.

While in the Gaza border communities the Kite and balloon terrorism has continued for more than half a year, their range seems to be spreading to the center of the country as well. Recently the flammable objects were found in Rishon LeZion, Bat Yam, Givat Brenner, Modi'in and in the Jerusalem area.

One of the balloons was discovered in the yard of the home of Almog Peretz from Givat Ze'ev. "We got up in the morning and saw a balloon attached to a wire attached to a cigarette and a blue object — apparently explosives," Peretz said. "We called the police and a sapper came and ordered us out of the house. The balloon could have ignited and burnt the whole yard.”

Incendiary balloons in Eshkol Region
In the Shfela region, such occurrences have been going on for almost two weeks. Several incendiary balloons were found in the Modi'in region, and in the city of Modi'in itself. The same happened in Nof Ayalon, at Kibbutz Hafetz Haim, and the last incident occurred on Saturday at a parking lot in Givat Brenner. All the balloons were found in open areas, away from private homes and none of them caused a flare up.

A balloon found in Jerusalem (Photo: Police Spokesman)
"Before Shabbat I saw eight balloons that were attached to some sort of object. It looked suspicious; they were moving fast but were not burning,” said Revital Hadad who saw incendiary balloons hovering above her house in Beit Shemesh (45 km from the Gaza strip). “We immediately called the police. It was very scary and my daughters were very anxious and started asking questions. We've already heard that there were balloons in the area, but now I've seen it with my own eyes. I hope it does not turn into a phenomenon,” she said with concern. Meanwhile, a fire fighting official tried to put matters into perspective: "Fortunately for us, so far, 99 percent of the time the balloons reach these areas when they are no longer burning and their fuel is depleted.” However, he added: "We take every such instance seriously—we go secure the site and we check that there is no chance of a fire." According to him, while in the Gaza vicinity emergency service crews are very familiar with the matter, in the center of the country there is no particular protocol for handling the matte and every balloon is treated as just another fire incident. "I assume that now, after the last few weeks, the balloon issue has a higher awareness among fire fighters in the center of the country."

On Friday, an incendiary balloon was neutralized in Rishon Letzion before it could cause casualties or damage. A police sapper was called to Shprinzak Street in the city, where the balloon with an Arabic inscription was located on a safety railing. That was the fifth balloon that landed in the Shfela region last week.

Following the incident, Rishon LeZion Mayor Dov Tzur convened the city's security forces to assess the situation and instructions were issued to the municipal hotline to handle every incident quickly. In addition, the municipality requests that residents report any suspicious object to the police or the municipal hotline and refrain from touching it.

(Photo: The Police Spokesperson's Unit)
Last Thursday, around midday, a suspicious balloon landed on Bar-Ilan Street in Bat Yam, causing a street closure and police sappers rushed to the scene. The balloon, which was identical to other balloons recently launched from the strip (white with a red logo of one of the Palestinian organizations), was attached to a piece of cloth with combustible material that was apparently extinguished during its flight. One of the police sappers at the scene said that in his opinion, the balloon could not have come from the Gaza Strip — but he could not rule it out. "The distance from Gaza to here is more than 50 kilometers and it seems to me bizarre," he said. "I'm not a balloon expert, but we treat every suspicious object seriously so that passersby will not be hurt. I've heard of a number of balloons that landed in the center and the Shfela and it raises a lot of questions that I have no answers to." Security officials also say that it is quite possible that not all of the balloons that landed in the center of the country last week actually came from the Gaza Strip, but may have been launched from cities in the center of the country in imitation of events in Gaza, perhaps in solidarity with the Palestinians.

The menace of incendiary balloons has increased significantly in recent days. In some cases the balloons have caused damage more than 20 kilometers from the Gaza Strip.

(Photo: AFP)
In recent days, the phenomenon has gained momentum and has become more sophisticated: balloons are being connected to small, sophisticated and deadly explosive devices. In the Gaza vicinity, where many explosive devices have been found in schools, private homes and on major roads, residents are already in despair. On an average day, ten fires were ignited in the region and last weekend saw 15 fires. On Saturday, for example, a balloon landed in the yard of a house in Kibbutz Zikim, and last week another was found in a school in the Eshkol Regional Council. Due to the proliferation of incendiary balloons landing outside of the Gaza vicinity, the issue was examined by the police, who are now working with the IDF and the Shin Bet to try to understand where the balloons are coming from and locate those responsible. So far, no suspects have been identified. The role of the sapper is to isolate the immediate area around the balloon and send a robot to neutralize it for fear of an explosion. "In the past three months, we have treated hundreds of cases in the south, sometimes dozens of balloons a day, and it is important for us to call on citizens to stay away and call the police if they encounter a suspicious balloon," said a police sapper from the southern district. "This is a war of attrition," said one Gaza region resident. "We breathe smoke almost all day because of the fires, and the children never stop asking questions. If before we used to talk to them about the importance of immediately entering the bomb shelter when they hear a Code Red alarm, now we are talking to them about incendiary balloons. My biggest fear is that something will happen to a little child who just sees a balloon and decides to play with it. It's so cruel." Last Tuesday, KKL reported that about 12,000 dunams of forest and natural woodland have been burnt across the Gaza border communities

over the past six months.