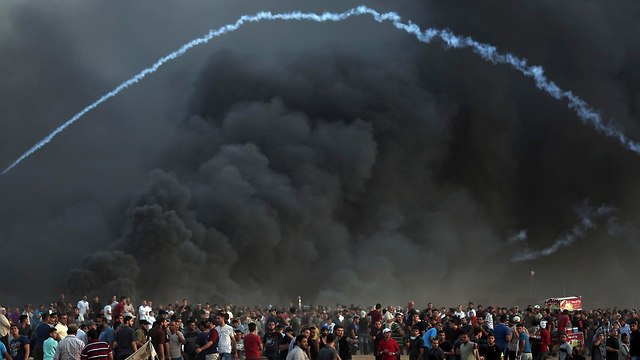 After releasing a video calling on Palestinians to attend the weekly 'March of Return' protests, Hamas-led organizing committee tells Gaza's residents 'Your blood is valuable, keep it to establish the homeland.'

The Hamas-led organizing committee of the weekly "March of Return" riots issued an unusual announcement Friday, telling demonstrators not to approach the Gaza border fence during the protests.

The Palestinians were asked not to come near the border fence so Israel would not have an excuse to attack the coastal enclave.

"Your blood is valuable, keep it to establish the homeland," the announcement read.

Earlier, Palestinian sources in the strip told Ynet that even though the committee had released an official video calling on Gaza's residents to attend the protests, Hamas is expected to restrain the violence near the fence.

The sources added that talks held with Egyptian intelligence officials, as well as Israel's warning that further escalation in the strip would force it to launch a military campaign in Gaza, would motivate the terror organization to curb the violence.

Israeli decision-makers believe that restraining the clashes along the border fence would restore calm there.

Skirmishes resembling to last Friday's riots, during which the Palestinians placed an explosive device on the fence, with 20 of them breaching it and prompting the IDF to open fire, would leave Israel with little choice but to launch a limited military campaign in Gaza, credible sources told Ynet.