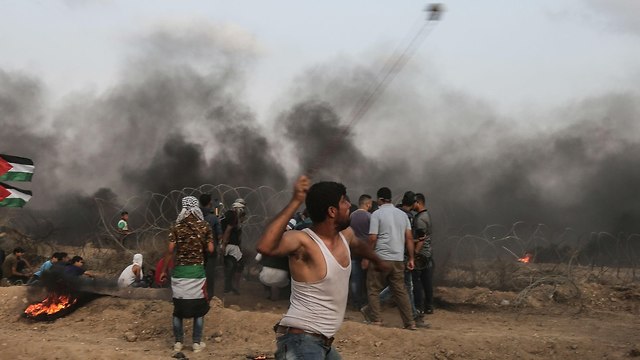 Most demonstrators keep away from fence but some burn tires closer; Palestinians breached fence and flee back into the strip three times, Israeli troops opened fire on infiltrators in one instance.

Some 10,000 Palestinians protested as part of Hamas's "March of Return" campaign at several spots along the Gaza border on Friday evening, with Israeli defense officials saying the clashes were the calmest over the past seven months and that Hamas has been able to rein in the violence.

The IDF said most of the protesters have been keeping their distance from the border fence, while dozens were burning tires and throwing rocks with slingshots closer to the fence.

Nevertheless, Palestinians managed to breach the border fence, enter Israeli territory and flee back into the strip three times. In one of the cases, the IDF opened fire at the infiltrators. The IDF said "all infiltration incidents were being monitored by the forces."

Hamas' al-Aqsa TV aired footage of Palestinians climbing over the fence and others breaching it and entering into Israeli territory. Others used cutters to tear down parts of the barrier.

Gaza's Health Ministry reported 130 Palestinians were wounded by Israeli fire and six of them were in serious condition. About 30 Palestinians suffered tear gas inhalation.

The IDF has deployed large forces along the border and has been preparing for the possibility the "March of Return" protest will escalate later. IDF Chief of Staff Gadi Eisenkot held a situation assessment on the border.

An IAF opened fire at a terror cell launching incendiary balloons from Gaza into Israel.

Meanwhile firefighting teams with aid from the KKL and the Nature and Parks Authority have been working since the early morning hours to put out three fires caused by incendiary balloons.

The Hamas terror group said in a statement that "the persistence of the people in Gaza and the mass participation in the 30th week to the 'March of Return' to break the blockade is the biggest response to the threats of the Israeli enemy, as it serves as a great incentive for our people.

Hamas official Ismail Radwan added that "no element has asked us to stop the protests. Even the Egyptians stressed it is our right to protest."

Earlier, the Hamas-led organizing committee of the weekly "March of Return" riots issued an unusual announcement, telling demonstrators not to approach the Gaza border fence during the protests.

The Palestinians were asked not to come near the border fence so Israel would not have an excuse to attack the coastal enclave.

"Your blood is valuable, keep it to establish the homeland," the announcement read.

Sources in Gaza further told Ynet Hamas is expected to tone down the display of violence.

The sources added that talks held with Egyptian intelligence officials, as well as Israel's warning that further escalation in the strip would force it to launch a military campaign in Gaza, would motivate the terror organization to curb the violence.

Israeli decision-makers believe that restraining the clashes along the border fence would restore calm there.

Skirmishes resembling to last Friday's riots, during which the Palestinians placed an explosive device on the fence, with 20 of them breaching it and prompting the IDF to open fire, would leave Israel with little choice but to launch a limited military campaign in Gaza, credible sources told Ynet.

"In light of today's planned Gaza march, I urge all to exercise restraint, to proceed in a peaceful manner, and to avoid escalation," Mladenov said in a statement. "The UN is working with Egypt and its partners to avoid violence, address all humanitarian issues and support reconciliation."