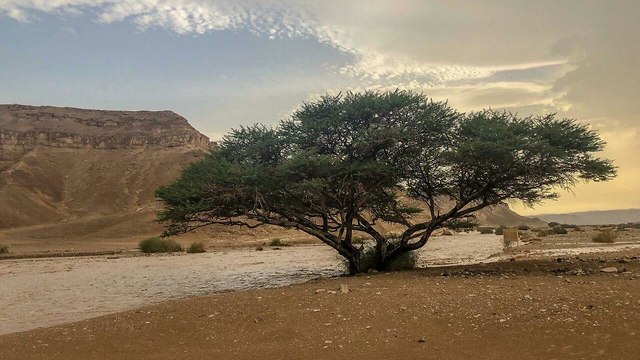 First floods of the season hit the Arava streams: Due to stormy weather and floods in Eilat, the Arava region, Eilat airport closes and is set to reopen at 11pm, and Route 90 was blocked; the public is asked to stay away from these areas; airplanes on their way to Eilat turned back to Ben-Gurion and Sde Dov airports.

Heavy rain in the south of the country caused floods Saturday evening in Eilat and the Arava region. As a result, Eilat airport closed, and road 90 was blocked.

The Israel Airports Authority reported that a cloud breakage formed large puddles on the runway and water started to drift. Therefore, they said, the runway is not fit for landings and takeoffs.

As a result of the heavy floods, a Boeing aircraft and an Embraer plane on their way back to Eilat landed at Ben-Gurion and Sde Dov airports instead. In addition, the entry road to Eilat was closed earlier and Eilat municipality sent teams as well as contractors with heavy tools to restore the roads to full functionality. The airport is set to reopen at 11pm Saturday.

During the afternoon, floods hit Nahal Paran, Nahal Tzofar, Nahal Barak and Nahal Ashush in the southern Arava area. No injuries were reported.

Heavy floods in the south
X

Heavy floods in the south

Route 90 was closed due to floods for a few hours, and other areas are still at risk. This is the first floods in the region for this year's winter season.

According to a statement made by the police, "a weather system is expected to enter the southern region, including a flash flood in the Jordan Valley, the Judean Desert, the Dead Sea and the Arava. Therefore, the public is asked to stay away from these areas."

In addition, the The Israel Nature and Parks Authority reported that due to the Meteorological Service's forecast, and the high risk of floods in the Dead Sea region, the Ein Gedi Nature Reserve has been closed for travelers. Earlier, restrictions were imposed on tours in this area.

The volatile weather will continue for the next few days, with a warm-up that expected to kick in Monday, which will be unusually hot.