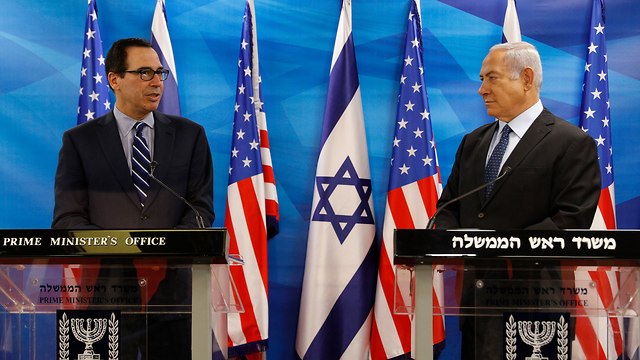 US treasury secretary met with Prime Minister Netanyahu in Jerusalem as part of his official Mideast tour; Mnuchin promises to 'make sure' Trump administration invests more in infrastructure and technology in Israel.

US Treasury Secretary Steven Mnuchin praised investment opportunities in Israel on Sunday and said Washington would increase its participation in infrastructure projects there.

"We have a very important relationship with Israel. This is really a great place for investments, particularly technology investments," Mnuchin, launching a Middle East tour, told reporters in Jerusalem.

"We are going to make sure we do more infrastructure investments here," he added, without elaborating, in remarks alongside Prime Minister Benjamin Netanyahu.

Netanyahu and Mnuchin (Photo: EPA)
Israel and the United States have strong trade and business ties, particularly in the high-tech sector. Most of the large US high-tech firms including Google, Amazon, Microsoft and IBM have research and development centers in Israel.

Intel Corp in May submitted plans to expand its production operations in Israel, with the Israeli government saying the US chipmaker would invest about $5 billion. Intel's exports from Israel amounted to $3.6 billion in 2017.

He said information so far on the investigation of the death was "a good first step but not enough" as Riyadh faced increasing international pressure over what happened to Khashoggi, who disappeared after he entered the Saudi consulate in Istanbul on October 2.

President Donald Trump, who has said the United States would consider sanctions against Saudi Arabia, emphasized on Saturday that he was not satisfied with the Saudis' handling of the case.

Mnuchin confirmed that he would not attend a Saudi investment conference on Tuesday. However, he said he would visit Riyadh as planned for talks with his counterpart on joint efforts to counter terrorist financing and plans by Washington to reimpose sanctions against Iran in November.