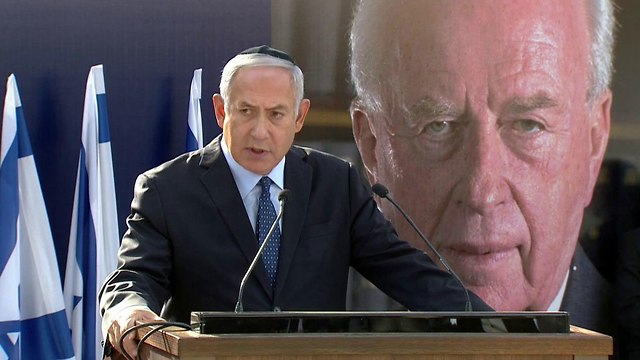 Netanyahu: Israel will renegotiate lease on lands with Jordan

Prime Minister Benjamin Netanyahu said Sunday that Israel will renegotiate two annexes to its peace treaty with Jordan in an effort to maintain control over Naharayim and Tzofar, after the Hashemite Kingdom decided to reclaim the territories.

Under the accord, Israel has been leasing the Island of Peace in Naharayim and the Tzofar enclave in the Arava for nearly a quarter of a century.

Israeli farmers have cultivated the land for many years, but the terms of the agreement state that 25 years after the initial signing, each party will be able to discontinue the lease of the land on one condition—it should be done one year in advance, and this Sunday marks 24 years since the treaty was signed.

"Jordan has reserved the option to reclaim the area in Naharayim near the Jordan River and the Tzofar enclave in the Arava. We were told today that it seeks to exercise this option in the 25th year," the prime minister said. "We will go into negotiations with them on the option of extending the existing agreement."

Nevertheless, Netanyahu stressed, "There's no doubt that in a general outlook, the entire treaty is a valuable asset, important to both countries."

The peace treaty with Jordan, alongside the one signed by Prime Minister Menachem Begin with Egypt, "are main anchors of regional stability," the prime minister added.

"In addition, we're expanding ties with other Arab countries for whom the State of Israel is not the enemy," he concluded.

Jordan's King Abdullah, who has been facing pressure for some time to cancel the agreement with Israel, announced the decision to reclaim the territories on Sunday.

Central Arava Regional Council head Eyal Bloom expressed concern by the Jordanian decision, saying "the agricultural lands in the Tzofar enclave are significant to the security of the area, the state, the livelihood of the residents and agriculture in the central Arava. This would mean the collapse of 30 farms in an area of some 1,400 dunams (346 acres)."

"It is unacceptable that after so many years, there would be such a huge disruptive change," Bloom added.

He called on Prime Minister Benjamin Netanyahu to resolve the crisis, saying the lands in question don't only serve for agriculture, but also "constitute a barrier between the populated areas of the Arava and Jordan, and they are critical, because of their location, to the security of the region and the state."