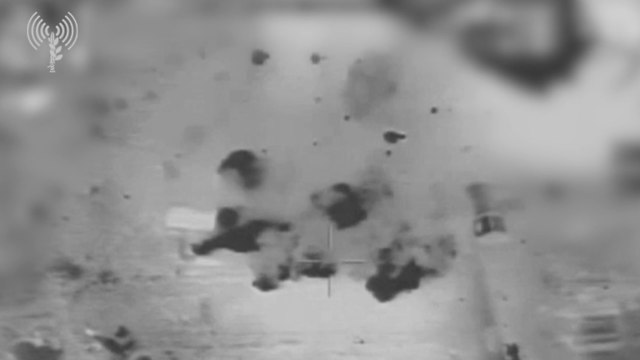 A military compound, a training camp and a weapons storage facility, belonging to Gaza's rulers, are among the areas targeted by the IDF in extensive overnight strikes after a rocket fired from the strip landed in the Eshkol Regional Council on Wednesday night; no damage or injuries reported.

Israeli Air Force (IAF) aircrafts attacked overnight Thursday eight Hamas sites in Gaza in response to a rocket fired from the strip, which landed in the Eshkol Regional Council.

The IDF Spokesperson’s Unit issued an official statement following the strikes, clarifying that among the areas targeted were a military compound, a training camp and a weapons storage facility belonging to the terror group.

The rocket alert siren went off at 23:17 on Wednesday in the Eshkol Regional Council, and according to the IDF, an Iron Dome interceptor missile attempted to down the rocket but failed.

The rocket exploded in an open area and no damage or casualties had been reported.

A Code Red siren also blared in Merhavim Regional Council, but no missiles are reported to have hit the area.

Hamas did not officially claim responsibility for the rocket attack. However, the IDF blamed Gaza’s rulers for the incident.

"The Hamas terror organization is responsible for everything that is happening in the Gaza Strip, and it will bear the consequences for the terror activity aimed against Israeli citizens.

“The IDF is prepared for a variety of scenarios and is determined to continue its mission to protect the citizens of Israel," the statement concluded.

On Wednesday afternoon, an IAF plane attacked a Hamas observation post east of Rafah in the Gaza Strip, in response to incendiary balloons being launched into Israeli territory in the outpost's proximity.

In addition, two Palestinians breached the border with Israel. They retreated back to the strip shortly after.

IDF forces searched the area, and ruled out infiltrations into Israel.

Nine fires sparked throughout the day across the Gaza border communities as a result of incendiary balloons flown from Gaza.