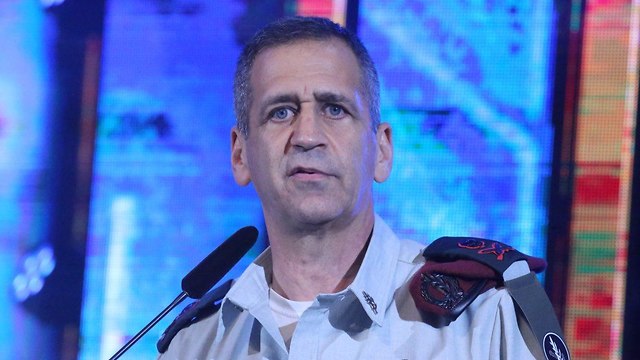 Deputy Chief of Staff Maj. Gen. Aviv Kochavi is the candidate chosen by the defense minister to replace the outgoing Eizenkot; decision was made due to Kochavi's 'impressive leadership skills, courage and creativity,' making him 'the most suitable candidate to lead the IDF in the coming years.'

Defense Minister Avigdor Lieberman announced Friday that he has chosen Deputy Chief of Staff Maj. Gen. Aviv Kochavi as his candidate to become the next IDF chief of staff to replace Lt. Gen. Gadi Eisenkot, who is scheduled to conclude his tenure by the end of the year.

The decision was made following an orderly election process conducted by Lieberman over the past three months. Kochavi’s candidacy will be presented before the Justice Eliezer Goldberg’s appointments committee on Sunday and will then be subject to the approval of Prime Minister Benjamin Netanyahu's Cabinet.

Lieberman announced his decision to Prime Minister Netanyahu and Chief of Staff Gadi Eizenkot, and also spoke with the three other candidates, thanking them for the "professional, respectful and gentlemanly,” way of competing for the position.

The defense minister has reportedly held many consultations with former prime ministers, defense ministers and former chiefs of staff, as well as former senior officers, some of whom, served as the commanders of the four candidates.

Lieberman's office issued an official statement following the announcement, emphasizing the defense minister’s belief that Maj. Gen. Kochavi was the most suitable and the most experienced candidate.

"Maj. Gen. Kochavi has impressive leadership skills, courage, creativity and impressive command capabilities. The unique combination of the positions in the IDF he has filled in the past, his ability to manages situations during the times of emergency, the esteem in which he is held by his fellow officers … all of this make his the most suitable candidate to lead the IDF in the coming years,” stressed the statement.

The 54-year-old Kochavi previously served as commander of military intelligence, chief of northern command and most recently as Eizenkot's deputy.

Kochavi took part yesterday in the graduation ceremony of the officers’ course at Bahad 1 base, where he encouraged the soldiers to always take the initiative and lead the way.

"The task that is imposed on all of us is becoming more complex every day. In this state of affairs, there is a special place for originality and innovation. So, do not settle for what you have, and do not take anything for granted.

“Stick to your goal, but question the method and the way. Do not accept any existing norms, but offer an alternative ... lead the way,” he exclaimed.