Gaza's health ministry says a 27-year-old protester was killed by IDF fire as hundreds riot and hurl stones at security forces along the border fence near Kibbutz Zikim; earlier, Islamic Jihad threatened to avenge killings of 3 Palestinians on Sunday.

The Palestinian health ministry reported Monday that a 27-year-old Palestinian man had been killed in border clashes with IDF forces in the northern Gaza Strip near Kibbutz Zikim.

On Sunday, three Gazans were killed in an IDF airstrike near Khan Yunis after they were spotted planting a suspicious object on the border fence, believed to be an explosive device. 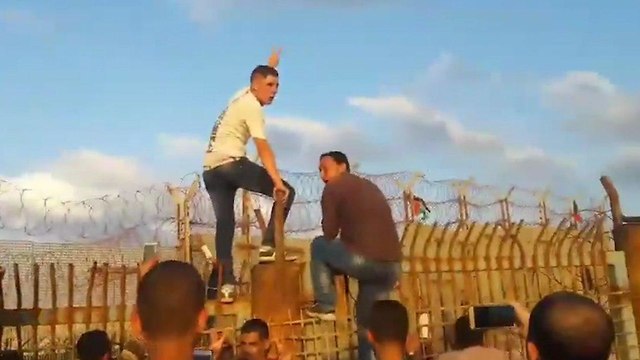 A preliminary IDF investigation revealed that the three were spotted by a Gaza Division observation post while crawling towards the security fence holding a suspicious object in the dark. They fiddled with the object on the ground near the security fence before being shot by the IAF.

According to the Palestinians, the three were teenagers: two were 14 years old and one was 13 years old.

The Islamic Jihad later threatened to avenge the death of three teens, saying that "the resistance will respond to this crime in a way that suits its magnitude."

In addition, hundreds of Palestinians protested throughout the Gaza Strip early Monday, calling on Hamas and Islamic Jihad to respond to the killings.