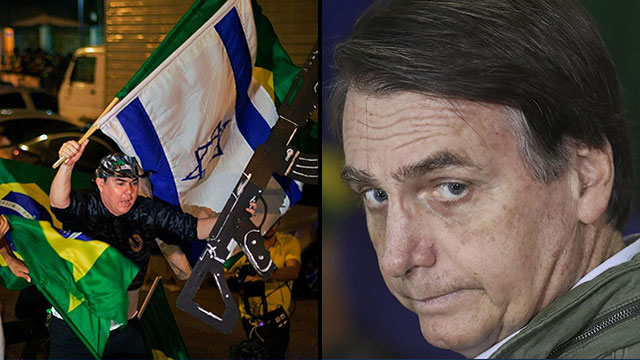 Diplomatic sources say they expect the South American state to take a pro-Israeli stance in international arena following Jair Bolsonaro's promise to not only move the embassy from Tel Aviv to Jerusalem, but to also remove PLO offices from the country because 'Palestine is not a state.'

Bolsonaro also said he would remove the Palestine Liberation Organization (PLO) mission offices from Brazil due to the fact that “Palestine is not a state,” and added that he plans to visit Israel as soon as he is in power.

Netanyahu congratulated the new Brazilian leader for his win in a phone conversation on Tuesday. “I am certain that your election will lead to a great friendship between our peoples and the tightening of links between Brazil and Israel. We await your visit to Israel," he said.

Due to the diplomatic policies of the previous administration, which aligned itself with Brazil's South American neighbors and other developing powers, the country has had pro-Palestinian tendencies for many years.

The diplomatic sources said that from now on, they expect Brazil to vote “blue and white” on the international arena.

Although the economic and cultural ties between the two countries have been stable, relations were never warm. In November 2009, President Shimon Peres visited Brazil, and a year later Brazilian President Luiz Inácio Lula da Silva paid a reciprocal visit to Israel.

In 2015, the tensions between the two states reached an all-time high following Brazil's refusal to approve the appointment of Dani Dayan as Israel's ambassador to the South American country due to his affiliation with the Yesha Council—an umbrella organization of municipal councils of Jewish settlements in the West Bank.

In the end, Brazil's then-president Dilma Rousseff, who led the opposition of Dayan's appointment, was dismissed on charges of corruption.

The 63-year-old Bolsonaro ran as an outsider bent on smashing what he sees as a corrupt and hidebound political system that has forgotten ordinary citizens. His fiery rhetoric and slurs against gays, women and minorities have thrilled followers who view him as an authentic straight shooter. He has championed law and order, patriotism and religious values. And he has demonized his leftist detractors as enemies of the people.

Bolsonaro appears to be an ardent admirer and shrewd imitator of his US counterpart Donald Trump. And that could usher in one of the warmest bilateral relationships in the Western Hemisphere.

He has vowed to drain the swamp, slash regulations and get tough with China. He has also denounced the media as "fake news.”

Trump called to congratulate Bolsonaro on Sunday night, shortly after the far-right congressman scored a resounding victory at the polls, winning 55 percent of the vote following a mud-slinging campaign with a leftist rival.