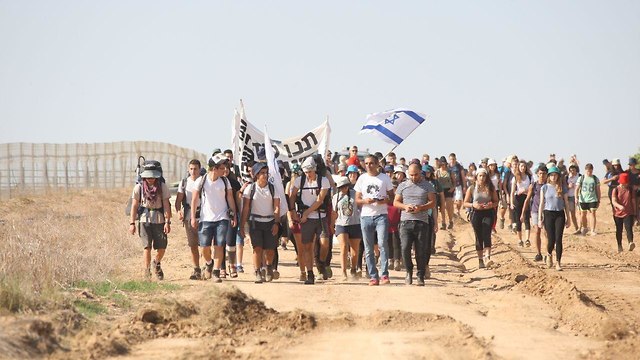 Completing a 90 kilometer, five day march, some 6,000 youth from the Gaza border communities arrived at a protest rally in front of the Knesset in Jerusalem: "Let us grow up in peace," they cried.

Thousands of high-school students from Gaza border communities began the last leg of their protest march Thursday and are expected to reach the Wohl Rose Park park situated opposite the Knesset in Jerusalem.

The youth have organized the march in order to raise awareness of the ongoing high tensions on the Gaza border. The students—sophomores, juniors and seniors—have walked over 90 kilometers for the past five days in order to reach the capital, and they were joined along the way by their peers from other areas of the country.

On Thursday morning, the teenagers were joined by the bereaved families, who lost their loved ones during Operation Protective Edge.

President Reuven Rivlin greeted the youth as they entered the city and said: “How fortunate are the people whose youngsters march at its head, and happy are the parents who raised their children with such a feeling of national pride, of love of the country, of such a meaningful connection to our wonderful country. You are not the young people of the area around Gaza, you are the young people that embrace the whole country. We hear your call and it breaks our hearts. I promise you: we will not, and we must not, let the Code Red alarm become a routine. Red will remain the color of the wildflowers that grow in the area.”

The president then marched with the youngsters who continued from there towards the Knesset.

Despite the harsh weather conditions over the past week, the march continued as planned and the youth reached Jerusalem around 4pm, where a rally was held during which the participant demanded that the government restore quiet to the Gaza border region, ravaged by Hamas-led border violence over the past seven months.

The president speaking to the marchers (Photo: Gov. Press Office)

The organizers of the demonstration emphasized it’s not an attempt to convey political messages. Dozens of local authorities made busses available at the student's disposal.

Ophir Liebstein, the head of Sha'ar HaNegev Regional Council, praised the efforts of the teenagers.

"I congratulate these amazing youth for this authentic protest, absent of politics or unnecessary rhetoric. These exceptional young men and women are marching to Jerusalem to protect their home … We stand with them … They managed to unite the country,” he stressed.

Gadi Yarkoni, chairman of the Eshkol Regional Council, spoke about the measures taken in support of the protest.

“The awakening of the protest in the communities surrounding the Gaza Strip on the security situation is understandable, justified and legitimate,” he said. “Protests, by nature, come from below. And that is their strength. It is not correct for the council to lead protests but it can support and give them a tailwind using the tools available to it, that is how we operate.

“We allowed the students of the "Nofei Habesor" to protest at the council junction, without the police's approval. We set up buses to transport students and escorts. We have budgeted films for the students and all the resources in the council are geared towards assisting and cooperating in favor of the matter, each in its own field. We stand behind you. I'll be at the rally too, and ask —let them grow up quietly.”

"Let us grow up in peace" (Photo: Roee Idan)

Growing up in the shadow of war

The children know no other reality than that of the Code Red sirens, rocket barrages and military operations. Now, shortly before they enlist in the IDF, they have organized this large protest, the most significant one since the wave of incendiary balloons and kites caused so much damage.

Because the Education Ministry is barred by law from endorsing such protests at the expense of class time, their schools took no part in the march. But the teachers and administrators lent their support.

Marching from Gaza to Jerusalem

Ahead of the march, students prepared placards, flags and T-shits with the logo “let us grow up in peace.” “Our message is that we want change,” said Roi Rahaf, a twelfth grader from Kibbutz Miflasim.

“Ever since we were born we have been living between wars… The government has the power to change this, which is why we are marching to the Knesset. It is a march to arouse awareness regarding what is occurring in the Gaza vicinity, to tell our story of youth dealing with the difficult security situation. It is a long and enriching journey.”

As with any modern protest, updates were released in real-time via the group’s Instagram and Facebook pages.