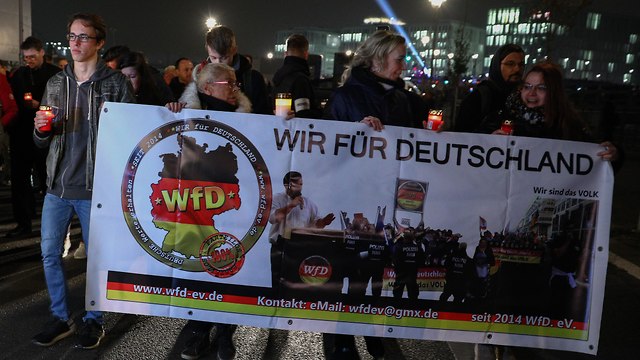 Germany's Wir für Deutschland party organize a march on the day the country commemorates 80 years since the start of the 1938 pogroms. There were no overtly anti-Semitic slogans or symbols but the timing of the demonstration conveys the real message.

The tensions were high at Berlin's Washingtonplatz, near the Central Bus Station's exit, ahead of a march organized by the nationalist group Wir für Deutschland (We are for Germany), which was planned deliberately for November 9—the date that marks the 80th anniversary of Kristallnacht, a 1938 pogrom against the Jews of Germany, during which over 90 were murdered and their property was destroyed.

The march, titled "A parade of sorrow in memory of the victims of politics," was allowed to take place by the Berlin Administrative Court, overturning the previous decision by the administration of internal affairs.

These far-right organizations have a system. They act without clear anti-Semitic symbols, without clear slogans—they light candles and walk around the government complex. But the timing of the march conveys the real message.

The truth is that not many of them actually showed up. In fact, the counter-protest against the WfD was much larger in scope. Thousands of Berliners who made the effort to attend the demonstrations at the tail end of a working week came to roar in unison—"We are all fighting the fascists" and "Nazis out." Some of them held Israeli flags and banners with an immortal quote from Primo Levi: "It happened, therefore it can happen again."

There were no violent clashes between the two opposing group. The police kept them apart, allowing only journalists and photographers to cross the divide, and even they had a hard time. Christian, a local photographer, guided me through the march by translating the banners, identifying the leader of the WfD, warning me not to say my name in the presence of the leader’s men, and also interpreting the situation.

From time to time, Christian would choke up and find it hard to speak. He recalled the night of the last parliamentary elections, saying that when he heard about the extraordinary achievement of the far-right political party Alternative for Germany (AfD), he simply “burst into tears.”

At a certain point, the WfD's crowd began to play hideously kitschy music designed to overcome the anti-fascist demonstrators. Nausea overwhelmed me. Christian and I kept going—he took photographs and I stared at the adults and young people who wish to erase history, or even worse—to be proud of it.

On our way back to the station, I told him that it was actually encouraging to see the contrast between the WfD’s small crowd and the overwhelming number of people that showed up to support the counter protest.

"That's true," he replied, adding "but I also remember the times when the very existence of such a march was unimaginable.”