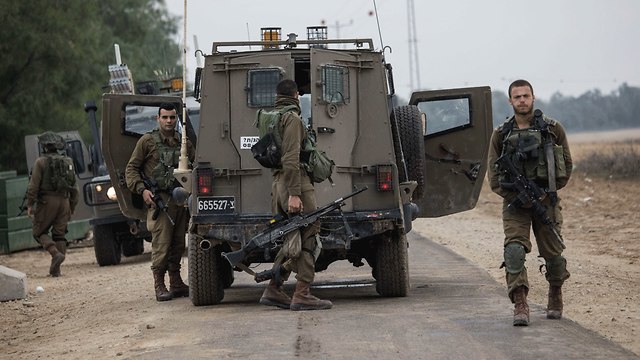 Op-ed: Although the death of an IDF soldier in Gaza Sunday might have changed the trajectory of events, lately it seems as though the roles of the country's political Right and Left have switched with Netanyahu wanting to avoid an operation in Gaza at all costs, but the second intifada proves that terror can indeed be defeated through military intervention.

Prior to the tragic events of Sunday night that resulted in the death of an IDF soldier in Gaza, it seemed as if Peace Now has been reborn within Likud. The slogans remained the same: "Peace is made with our enemies," "We must exhaust all possibilities," and perhaps the most surprising argument of all is that there is "no point in fighting because we’ll just end up finding ourselves in the same spot."

On the other hand, the Israeli left is also suffering from a split personality disorder—supporters of peace and compromise suddenly endorsed a military operation with the possibility of having hundreds of dead on the Palestinian side, simply to spite Netanyahu; theoretically, of course. On Sunday evening things were already different. The reality here confuses everyone.

"Let the IDF win" was the slogan that Uri Ariel, who was Secretary General of the Yesha Council during the second intifada, coined in protest over the decision of the political echelon to behave with restraint in the face of terror. It was an ideological-philosophical battle at the heart of which stood a bloody experimental laboratory.

Ten years ago, together with Prof. Zakai Shalom, I published a book titled Let the IDF win, a dull academic study full of data and quotations.

On the one side, there were statements by politicians, journalists and intellectuals from the left, who claimed that you can’t beat terrorism, and it’s been proven in practice many times around the world: The Americans in Vietnam, the Soviets in Afghanistan, the French in Algeria, and even in Israel when we withdrew from Lebanon because we had no choice.

On the other side, were those who called for a military intervention in order to defeat terror, one of whom was Uri Ariel, and they were right. The IDF entered the West Bank and defeated suicide terrorism. In those strange days, the left was the one who argued that there was no point in entering Gaza, Jenin or Nablus, because we would eventually return to the same point we departed from. Today the situation is reversed.

I am aware that it is no longer popular to have an opinion of your own because today's ideology is that you are either with Netanyahu or you are against him. Still, I find it hard to free myself from the conclusions that I have drawn from the past. Those who do not want to resolve the situation militarily will find themselves in a military operation without a possible resolution; if not right now, then soon.

The Israeli government has had only two options since the end of Operation Protective Edge: the internationally funded Marshall Plan in the Gaza Strip with the subsequent demilitarization, or a well planned military operation intended to resolve the issue once and for all—destroying Hamas's centers of gravity—a military language that at one time, everyone was able to understand.

There is no interim solution worth $15 million. It's an illusion. The enemy state on our southern border must be restrained through deterrence, either by giving them something to lose or by eliminating the regime, in order to clarify the price they have to pay for their terror.

The introduction of Qatar is another ideological mystery. Not long ago, I joined my friends from the national camp in criticizing the construction of a stadium funded by Qatar's money. Qatar is a state that sponsors the Hamas headquarters in Doha, provides refuge to leaders of the Muslim Brotherhood who fled Egypt, and a country with links to the Islamic State and other jihadist organizations that fought in Syria. We complained about them sponsoring our stadiums, now we are the couriers.

On Sunday, Netanyahu spoke openly about the issue for the first time. In the only democratic country in the region that has freedom of press, most of the updates on this strange ceasefire arrangement come from Hamas. The Cabinet has so far avoided admitting to have agreed to anything. Bennett and Lieberman claim they object—each in their own words, while Netanyahu claims that everyone has given their approval. And still no one is willing to tell us what the strategic goal is? What do you want to achieve?

Even if the voters do not care whether it is forbidden or permitted to negotiate with a terrorist organization that infringes on Israeli sovereignty, the residents of the Gaza border region, the soldiers, and the civilians who will be called up for reserve duty, do care. What does the State of Israel seek?

My apologies to those who target everything that Netanyahu says, but to go back in time to last March is a goal that has no reasonable explanation or a chance of materializing. In March, we were on the cusp of a military operation just like we are right now. In March, the humanitarian problems were also similar.

The month of March has passed, $15 million dollars will not bring it back. It is the IDF’s turn to win—it is possible despite the defeatist statements, or simply explain to us what the alternative strategy is.