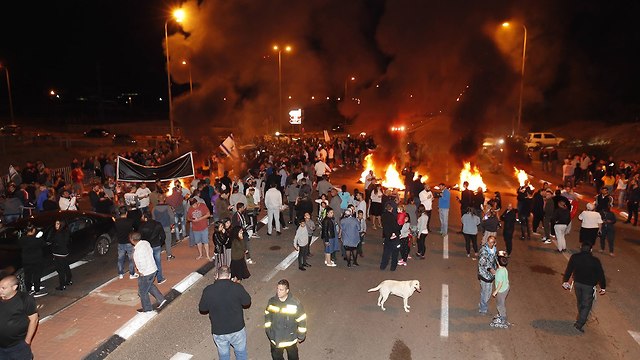 The news that the government agreed to an Egyptian-brokered ceasefire with Hamas was met with anger by Israelis living in communities bordering Gaza; residents burned tires and blocked the entrance to Sderot, while high school students declare strike.

Israelis living in communities near the Gaza border took to the streets on Tuesday evening following the news that the government had agreed to the Egyptian-mediated ceasefire with Hamas after a tense 24 hours of hostilities, which saw more than 460 rockets fired at Israeli territory and claimed the life of a 48-year-old man in Ashkelon.

The Home Front Command’s announcement that the security restrictions placed on residents in the area had been lifted was met with anger, with the residents burning tires and blocking the entrance to the city of Sderot for over an hour.

They condemned Prime Minister Benjamin Netanyahu's policy in a city considered a stronghold of his Likud party, holding up signs bearing slogans aimed against the prime minister, such as “Bibi, we’re fed up—we want security,” and “Treat Sderot the same as Tel Aviv.”

The protesters wished to convey that they were ready to pay the necessary price if Israel launches a wide-scale military operation in Gaza to end the rocket fire once and for all. The weak Israeli response, as they perceive it, would only lead to another round of fighting in the near future.

At some point, the demonstration turned violent with clashes erupting between protesters and the police, as well as with the drivers who had been stuck in traffic for hours due to the disturbances. Protesters even tried to pull the firehose out of the hands of the officers who were in the process of putting out the tires that had been set alight.

"A ceasefire again?" asked Sderot resident Meital Edri. "For how long, Mr. Prime Minister? We want to raise our children in a normal way. We want quiet just like in the center of the country. Do we not deserve it?"

Raya Shamis joined the demonstration along with her three daughters, Linoy, Romi and Ofri. "I'm 43 years old and don't know how long this will last. What am I going to say to my daughters? How long will this nightmare continue?” she vented.

On Wednesday morning, hundreds of high-school students gathered outside the Shaar HaNegev High School—one of the largest in the Gaza border region—and declared a strike in protest of the ceasefire.

"After a day of missile attacks, endless rocket alert sirens, one casualty and many wounded, we refuse to remain indifferent to the situation," the students said in a statement, adding they intend to continue their strike in the upcoming days.

Earlier this month, the students marched some 90 kilometers from the Shaar HaNegev Regional Council to the Knesset in Jerusalem, demanding to be allow to "grow up in peace."

"Two weeks ago they said that there was an arrangement (with Hamas), and I said that we don’t have anyone to rely on anymore. I don’t know what to say,” said Alon Levy, one of organizers of the protest.