Violent passengers on El Al flight from NY to TLV 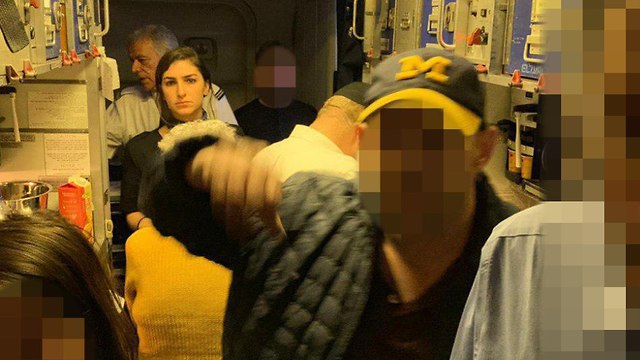 After a five-hour delay, an El Al flight from NY to Israel lands in Athens to avoid desecrating Shabbat; in response, passengers clash with crewmembers; 'young flight attendants were hit and verbally attacked by ultra-Orthodox passengers'; El Al says it will file a complaint with the police.

El Al announced Saturday its intention to file a police complaint against passengers who attacked crew members on a flight from New York to Israel, which was delayed due to a snowstorm on the East Coast and landed in Athens to avoid desecrating Shabbat.

The crew was taken to the airport at 3:30pm, in two separate shuttles from two hotels located in different parts of the city. One group arrived relatively quickly and began to prepare the plane for takeoff. But the second group was delayed by heavy traffic due to snow, and arrived at the airport five and a half hours late—two and a half hours after the original flight departure scheduled time.

Violent passengers on El Al flight from NY to TLV
Religious passengers began to panic, fearing they will not be able to observe Shabbat properly. Some passengers asked to get off the plane, but the captain promised that the plane would arrive in Israel before Shabbat and that they will "soon take off."

However, due to the heavy snowfall, the wings of the airplane had to be de-iced. After the plane was cleared of snow and began exiting the taxiway, it turned out that there was a long line of planes already waiting to depart. Finally, the flight took off at 11:45pm delaying the time of arrival to 4:55pm Friday—several minutes after Shabbat was to begin.

At this point a commotion began. According to one passenger, Shimon Sheves, former general director of the Prime Minister's Office, a group of ultra-Orthodox passengers began attacking the flight attendants.

"Suddenly, I hear a group of people, about 10 or 15 ultra-Orthodox passengers, yelling at the staff in a mixture of Hebrew and English. 'Liars, cheaters, you lied to us,' they screamed. It turns out they didn’t want to board the flight in New York, but were told by the pilot that the plane is scheduled to land in Israel before Shabbat. Then, the captain announced the flight will land in Athens, adding that passengers who want to stay there over the weekend are free to do so. The religious passengers started shoving the flight attendants, so I got up and tried to help them. Some of the young girls were beaten up.

"The ultra-Orthodox Shabbat-observant passengers shoved them with their hands! They want to keep the Shabbat, but they have no problem using their fists. I separated these madmen from the flight attendants, who burst into tears and moved to the other side of the plane," Sheves said.

"A lot of passengers, both secular and religious, began to get angry and began to verbally, and even physically, attack the crew... on the other hand, some wonderful passengers stood between the crew and the group of passengers in an attempt to protect them from the angry group," she wrote.

"All this time, the crew chose to continue providing service, as much as possible, even though our eyes were filling up with tears.

"It is important for me to show the beautiful side of our passengers: some passengers tried to help us distribute food, some helped us store trays, and some even burst into tears when they saw what we had to go through. There was even an ultra-Orthodox passenger who thanked us for getting to see Athens for the first time.

"In retrospect, it became clear to us all that we should have stayed in New York, but if, as service providers, we come to work every day to do our job faithfully, there is no excuse for such behavior," she concluded.

After landing in Athens, the passengers who wanted to board a flight to Israel had to wait three hours. Their cargo, on the other hand, was flown to Israel in the original plane, along with the entire crew.