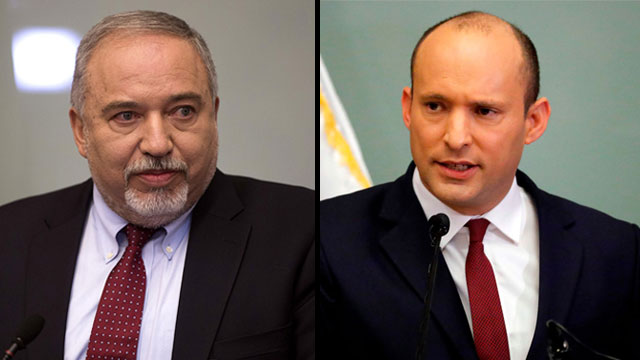 Yisrael Beytenu leader Avigdor Lieberman, who resigned his post as defense minister last week, on Monday slammed Education Minister Naftali Bennett and Justice Minister Ayelet Shaked not to resign from the government, saying it shows why Israel has lost its deterrence.

In a 20-minute televised speech, Bennett harshly criticized the Yisrael Beytenu leader for his shortcomings as the defense minister.

“The State of Israel is facing a crisis of confidence in the defense establishment," Bennett said. "The previous defense minister failed miserably, he abandoned the fight."

“I wanted to do the exact opposite, to take responsibility during a difficult fight, to rise up despite the difficulties that everyone is aware of. Not a single one of my advisors thought it was a good move,” added the education minister, who publicly demanded to be appointed defense minister.

Bennett's speech was followed by a statement from fellow Bayit Yehudi member and Justice Minister Ayelet Shaked, who gave her full backing to her party leader, while launching a verbal attack against Lieberman’s defense policy.

“The Israeli daring was replaced with a policy of 'sit and do nothing.' Israeli solidarity was replaced by a policy of containment as long as it's 'only' the border residents. The pursuit of victory was replaced by the disgraceful resignation of the defense minister—a gift to Hamas that will forever serve as a mark of shame," she lamented.

"We won't increase the psychological achievement Lieberman gave the terror groups in the strip," Shaked insisted. "They're watching us, and not just them—the entire Middle East is looking at us."

Bennett and Shaked's decision to remain in Prime Minister Benjamin Netanyahu's government was slammed by other members of the opposition, who argued that the Bayit Yehudi party has capitulated to Netanyahu's pressure.

"This attempt to conceal narrow political aspirations behind security considerations will fail. There has never been a more cynical use of matters of defense for political purposes—by Bibi, Bennett and Lieberman," she said, referring to the prime minister by his nickname.

"The debate is no longer about who will be the defense minister in the Netanyahu government, but rather who will replace him, and the reins of national security must be in our hands," Livni stressed.

"Naftali Bennett is a slave to his rabbis … Bayit Yehudi tries to hold the stick at both ends, and it doesn’t work. They are part of the reason why this government has failed. We’ll give them hell—there will be a more determined, more aggressive opposition. Our goal is to put an end to this cynical government," Shmuli emphasized.

Meretz leader MK Tamar Zandberg asserted some type of political deal must have been made between the Bayit Yehudi leader and the prime minister.

"I only hope the agreement made over the past 12 hours between Netanyahu and Bennett doesn’t bring us a futile political war, moments before the elections, and force soldiers and civilians to sacrifice their lives because Bibi and Bennett forged a deal," Zandberg added.

MKs from the Likud party, on the other hand, praised the Bayit Yehudi leader’s move.

MK Nurit Koren argued Bennett “came to his senses and realized what the public wanted,” while MK Sharan Heschel urged everyone to give Bennett and Shaked “a pat on the back,” because they “managed to put their egos aside” to save the coalition.

Minister Yariv Levin said the Likud party made “great effort to convince Bennett and Kahlon not to dismantle the government, and I am happy that the effort has borne fruit.”

"I say that they haven’t folded … they took on a heavy national responsibility. There is a concession here, which may also come at a political price, but as Bennett said—the country is above all else,” Yogev stated.