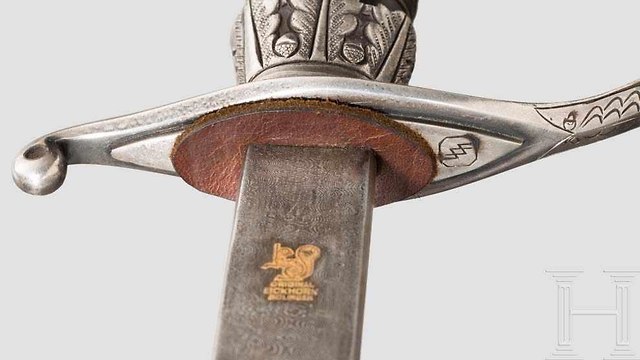 German auction house Hermann Historica is selling a present given by SS commander Heinrich Himmler to the Grand Mufti of Jerusalem Husseini during his visit to Nazi Germany in 1943; personal inscription 'My honor is loyalty' is engraved on the sword.

A rare sword, which was given as a present by SS commander Heinrich Himmler to the Grand Mufti of Jerusalem Haj Muhammad Amin al-Husseini during his visit to Nazi Germany in March 1943, is being auctioned online for the opening price of € 35,000, which is the equivalent of some NIS 148,000.

The sword was offered for sale on a British website—The Saleroom— by the German auction house Hermann Historica, which specializes in selling historical items.

The auction will end on November 23rd.

The sword is 95-centimeter long and is made of "Damascus" steel. On one side of the blade appears the inscription "To the Grand Mufti of Jerusalem, Haj Muhammad Amin al-Husseini, with loyal friendship, the Reichsführer," with two swastikas and the emblem of the SS—a pair of parallel vertical lightning bolts—engraved at the beginning and at the end of the sentence.

On the other side of the blade the SS's motto "My honor is my loyalty" is imprinted.

The hilt of the sword is made of Nickel and wood, with numerous Nazi symbols carved on it.

In June, the Israeli Kedem Auction House put up for sale six rare, never-before-seen photographs, in which Husseini is seen touring a camp in Nazi Germany, accompanied by Adolf Hitler and Himmler.

In 2015, Prime Minister Benjamin Netanyahu sparked international outcry, claiming the grand mufti of Jerusalem was the one who convinced Hitler to implement his Final Solution plan.