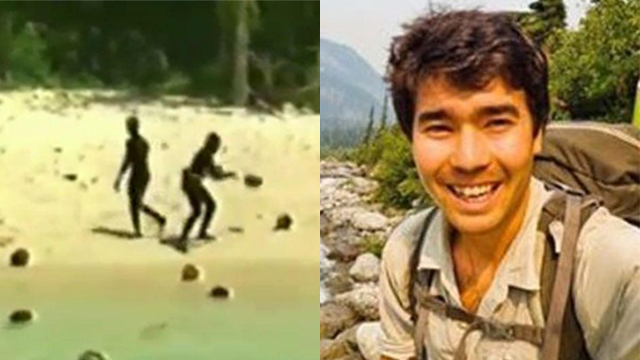 US missionary killed by tribesmen on remote Indian island

John Allen Chau, enthusiast hiker and traveler who visited Israel in 2015, was shot with arrows while illegally attempting to reach out to a native tribe in North Sentinel located on India's Andaman—popular with Israeli backpacking crowds.

US tourist John Allen Chau was killed last week by North Sentinel tribesmen who apparently shot him with arrows and then buried his body on the beach after he illegally ventured onto the Indian island, police say.

Indian authorities became aware of Chau’s death on Thursday and were struggling to figure out how to recover it due to the fact that even officials don't travel to the remote island, where people live as their ancestors did thousands of years ago, and where outsiders are seen with suspicion and attacked.

"It's a difficult proposition," said Dependera Pathak, director-general of police on India's Andaman and Nicobar Islands, where North Sentinel is located. "We have to see what is possible, taking utmost care of the sensitivity of the group and the legal requirements."

Police are consulting anthropologists, tribal welfare experts and scholars to figure out a way to recover the body, Pathak added.

The Andaman Islands are familiar to the young Israeli backpacking crowds, who visit Andaman's Havelock and Neil Islands as part of the popular backpacking route in South India. In fact, they make up the majority of foreign tourists on these islands and dominate a partially Hebrew speaking tourist infrastructure on Havelock's picturesque Beach Five.

John Allen Chau and the native tribes of the Andaman Islands.

Chau was an enthusiast hiker and traveler, and had visited Israel in 2015 as part of the Covenant Journey, a program that takes college students on tours of Israel to affirm their Christian faith.

He documented his Journey through Israel using his Instagram account, where he posted photos of Jazreel Valley, the City of David in Jerusalem, Caesarea, the Sea of Galilee and more. He even posted a picture of him with a Golani Brigade soldier and wrote that they spoke "about life in the IDF."

Chau had wanted ever since high school to go to North Sentinel to share Christianity with the indigenous people, said Mat Staver, founder and chairman of the Covenant Journey program, who knew Chau from the visit to Israel.

"He didn't go there for just adventure. I have no question it was to bring the gospel of Jesus to them," Staver said.

While visits to the island are heavily restricted, Chau paid fishermen last week to take him near North Sentinel, using a kayak to paddle to shore and bringing gifts including a football and fish.

It was "a foolish adventure," said P.C. Joshi, an anthropology professor at Delhi University who has studied the islands. "He invited that aggression."

Joshi noted that the visit not only risked Chau's life, but also the lives of islanders who have little resistance to many diseases.

"They are not immune to anything. A simple thing like flu can kill them," he said.

On his first day Chau interacted with some tribesmen—who survive by hunting, fishing and collecting wild plants—until they became angry and shot an arrow at him. The 26-year-old self-styled adventurer and Christian missionary then swam back to the fishermen's boat waiting at a safe distance.

That night, he wrote about his visit and left his notes with the fishermen. He returned to North Sentinel the next day, November 16.

What happened then isn't known, but on the morning of the following day, the fishermen watched from the boat as tribesmen dragged Chau's body along the beach and buried his remains.

Pathak said seven people have been arrested for helping Chau, including five fishermen, a friend of Chau's and a local tourist guide.

Chau was apparently shot and killed by arrows, but the cause of death can't be confirmed until his body is recovered, Pathak said.

In an Instagram post, his family said it was mourning him as a "beloved son, brother, uncle and best friend to us." The family also said it forgave his killers and called for the release of those who assisted him in his quest to reach the island.

"He ventured out on his own free will and his local contacts need not be persecuted for his own actions," the family said.

Authorities say Chau arrived in the area on October 16 and stayed on another island while he prepared to travel to North Sentinel. It was not his first time in the region: he had visited the Andaman Islands in 2015 and 2016.

A picture of Chau from his visit to Israel, posing with a Golani Brigade soldier (Photo: Insragram)

With help from a friend, Chau hired fishermen for $325 to take him there on a boat, Pathak said.

After the fishermen realized Chau had been killed, they left for Port Blair, the capital of the island chain, where they broke the news to Chau's friend, who in turn notified his family, Pathak said.

Police surveyed the island by air Tuesday, and a team of police and forest department officials used a coast guard boat to travel there Wednesday.

India has a very hands-off approach to the island's people, who killed two Indian fishermen in 2006 when their boat broke loose and drifted onto the shore, but Indian media reports say officials did not investigate or prosecute anyone in the deaths.

India recently changed some of its rules on visiting isolated regions in the Andamans. While special permits are required, scholars say visits are now theoretically allowed in some parts of the Andamans where they used to be entirely forbidden, including North Sentinel. Chau had no permit, police said.

Staver said Chau's last notes to his family on November 16 told them that they might think he was crazy but that he felt it was worth it and asked that they not be angry if he was killed.

For thousands of years, the people of North Sentinel island have been isolated from the rest of the world.

They use spears and bows and arrows to hunt the animals that roam the small, heavily forested island, and gather plants to eat and to fashion into homes. Their closest neighbors live more than 50 kilometers (30 miles) away. Deeply suspicious of outsiders, they attack anyone who comes through the surf and onto their beaches.

Scholars believe the Sentinelese migrated from Africa roughly 50,000 years ago, but most details of their lives remain completely unknown.

"We do not even know how many of them are there," said Anvita Abbi, who has spent decades studying the tribal languages of India's Andaman and Nicobar islands. North Sentinel is an outpost of the island chain, which is far closer to Myanmar and Thailand than to mainland India. Estimates on the group's size range from a few dozen to a few hundred.

"What language they speak, how old it is—t's anybody's guess," Abbi said. "Nobody has access to these people."

"Just for our curiosity, why should we disturb a tribe that has sustained itself for tens of thousands of years?" she asked. "So much is lost: People are lost, language is lost, their peace is lost."

For generations, Indian officials have heavily restricted visits to North Sentinel, with contact limited to rare "gift-giving" encounters, with small teams of officials and scientists leaving coconuts and bananas for the islanders.

"We have become a very dangerous people," said P.C. Joshi, an anthropology professor at Delhi University. "Even minor influences can kill them."

Abbi said scholars who visit isolated peoples are careful to limit their visits to a few hours a day and to stay away even if they have minor coughs or colds.

Many of the island chain's other tribes have been decimated over the past century, lost to disease, intermarriage and migration.

Survival International, an organization that works for the rights of tribal people, said Chau may have been encouraged by recent changes to Indian rules about visiting isolated islands in the Andamans.

"The authorities lifted one of the restrictions that had been protecting the Sentinelese tribe's island from foreign tourists, which sent exactly the wrong message, and may have contributed to this terrible event," the group said in a statement.