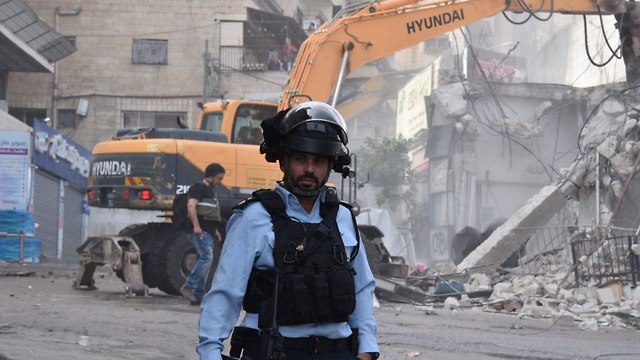 The European Union (EU) condemned on Saturday the demolition of 21 structures in Shuafat refugee camp in east Jerusalem, which the municiaplity said was done to benefit the residents.

"Last week, Israeli authorities demolished around 20 Palestinian commercial buildings in the Shuafat Refugee camp in east Jerusalem, only weeks after the Jerusalem municipality advanced plans to build 800 new housing units in the Israeli settlements of Ramat Shlomo and Ramot in east Jerusalem," the EU said in a statement.

"In addition, settlers in the east Jerusalem neighborhood of Silwan continue to promote legal proceedings that could lead to the eviction of up to 700 Palestinians living in the area."

"The European strongly opposes Israel's settlement policy, which is illegal under international law, and the actions taken in this regard, such as forced transfers, evictions and demolitions. The European Union expects the Israeli authorities to reconsider and revoke these decisions.

"The policy of settlement construction and expansion in east Jerusalem continues to undermine the possibility of a viable two-state solution, with Jerusalem as the future capital of both states, which is the only realistic way to achieve a just and lasting peace," the EU's statement read.

However, the Israel Police and the Jerusalem municipality said the demolitions were done following complains from Shuafat residents that the main axis crossing the heart of the refugee camp is very crowded as a result of illegally built businesses, which create a safety hazard for pedestrians and vehicles. During the operation, 18 commercial lots and three illegal gas stations were demolished.

The demolition was "unprecedentedly approved following the request of Shuafat's residents. The Jerusalem Police and the Jerusalem Municipality carried out an extensive operation in which illegally built shops—that caused intolerable traffic jams in the center of the camp—were destroyed," the spokesman said.

"The residents of the Shuafat refugee camp are fed up with the hypocrisy of the European Union, which prefers politics to residents' well-being. Tests and surveys conducted by the municipality show that the residents of the refugee camp are fed up with the failed services of the United Nations Relief and Works Agency for Palestine Refugees in the Near East (UNRWA), including their cleaning services, education, and social services," he said.

"The residents welcome the municipality's decision, including the recent demolition of buildings that endangered the camp's students. The EU should understand that it's time to stop lying. Jerusalem is a unified and sovereign city. It has no refugees but residents, which will now receive municipality services just like any other Jerusalem resident," Barkat added.

The plan to build 800 housing units in Ramat Shlomo and Ramot in east Jerusalem is in fact a governmental plan to construct 640 housing units beyond the Green Line, which was submitted for approval to the Jerusalem District Planning and Building Committee in October.

500 of the units are located in Ramat Shlomo, a neighborhood in northern east Jerusalem. The plan was frozen for nearly a decade due to government policy, and has now been approved by the District Planning and Building Committee, which is subordinate to the Ministry of Finance.

Aviv Tatarsky, a researcher at the left-wing Ir Amim (“City of Nations”) organization, who submitted reservations to the Planning and Building Committee, criticized the state's housing plan.

"The government is working to expel hundreds of Palestinians from their homes in the entire neighborhood of Silwan. The Israeli control of east Jerusalem constitutes a violation of the most basic rights... The European Union's response shows that the world doesn't accept this reality. The Palestinians don't accept this reality and there is no reason why we, Israelis, should agree to this policy, which only undermines the possibility of a fair arrangement in Jerusalem."