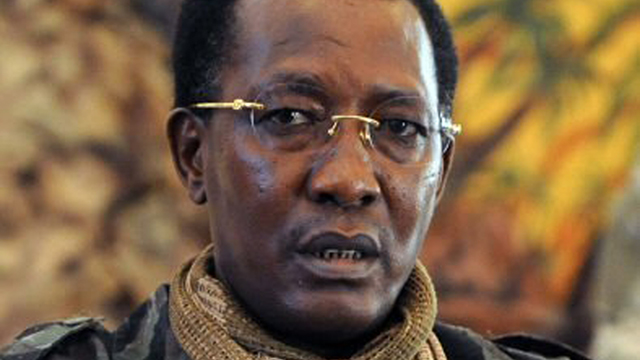 Chadian President Idriss Deby to meet with Prime Minister Netanyahu and President Rivlin in Jerusalem, the first such visit in Israeli history; Chad, where 52% of residents are Muslim, cut official ties with Israel in 1972.

Chadian President Idriss Deby will meet Prime Minister Benjamin Netanyahu in Jerusalem on Sunday, the first such visit by a leader of the Muslim central African nation, which severed bilateral ties in 1972, the Prime Minister's Office said.

"This is an historic meeting. This is the first visit of a Chad president in Israel since the establishment of the state (of Israel). It follows many diplomatic efforts led by Prime Minister Netanyahu in the last few years," the PMO said in a statement.

"This is an additional diplomatic breakthrough," Netanyahu said. "This is an historic and important visit that comes against the background of the efforts we have led. I welcome the President of Chad on his arrival in Israel."

President Deby will also meet with his Israeli counterpart Reuven Rivlin at the President's Residence in Jerusalem on Sunday evening.

"The visit is focused on security," one source told Reuters, adding that Israel has supplied the Chadian army with weaponry and other equipment this year to help in its fight against northern rebels.

This visit is the first by a president of Chad, a central African nation, to Israel since the establishment of the State of Israel in 1948.

Israel had diplomatic ties with Chad in the 1960s, but in 1972—even before the Yom Kippur War—official ties were severed. Even after cutting ties, however, the two countries continued holding talks, reportedly also maintaining security ties.

In 1995, Shimon Peres met with Chad's foreign minister. In 2005, reports surfaced that Chad was considering renewing its ties with Israel, but N'Djamena eventually went back on its decision.

In 2016, then-Foreign Ministry director general Dore Gold visited Chad and met with President Deby at his birthplace, to have exploratory talks on improving bilateral relations.

In that meeting, Deby praised the IDF and said he was interested in meeting with Prime Minister Netanyahu, and the two agreed to arrange the Chadian president's visit to Israel.

Gold told Israel Radio on Sunday that his Chadian hosts told him that they had cut off ties 44 years prior under Libyan pressure, a factor removed with the toppling of Muammar Gaddafi in 2011.

Netanyahu has made great efforts to extend Israeli diplomacy to Africa and has visited the continent several times in recent years. It's part of an overall policy of seeking allies among developing countries that have historically sided with the Palestinians at the UN and other international forums.

Chad, home to 15.8 million people, is not an exclusively Muslim country: 52.1 percent of its citizens are Muslims, while 44 percent are Christians—both Catholic and Protestant. The spoken languages in the country are French and Arabic (the official languages) and over 120 indigenous languages.

Even though Chad began exporting oil in 2003, 40 percent of its citizens are still living in poverty and over 10 million people do not have electricity. Over 65 percent of citizens are under 25, but the mortality rates are still considerably high.