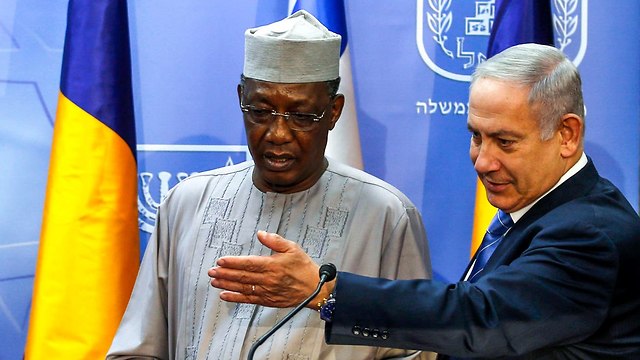 Netanyahu teaches his detractors a lesson in diplomacy

Op-ed: Chad's president's visit indicates a positive improvement in Israel's diplomatic standing, thanks to PM Netanyahu's extraordinary statesman skills. But the lack of any viable replacement to take over the helm is sobering.

One can be cynical about Chad President Idriss Déby's visit to Israel. It's very easy to dismiss the diplomatic significance and to mock Prime Minister Benjamin Netanyahu's remarks about the historic significance of the visit and the renewal of diplomatic relations that are likely to follow. However, those who choose to take this approach miss the bigger picture—Israel's return to being a leading state in the region.

When Netanyahu decided almost a decade ago, upon his return to the Prime Minister's Office, to go for an African strategy, there were many who thought it was a pipe dream. The golden age of Israel and Africa, whose peak was in the 1960s, seemed a distant dream at the time, and it appeared that without significant progress in negotiations between Israel and the Palestinians, this strategy was doomed to failure.

But it turns out Netanyahu was right and his critics were wrong. A strategy of formulating close ties between the State of Israel and African countries can succeed, despite the difficulties that stand in the way, and such difficulties do indeed exist. Israel of 2018 has a great deal to share with these countries, certainly more than it had 50 years ago. Therefore, a strategy that pivots toward Africa is likely to succeed, even in countries where Islam is prominent, such as Chad.

This does not mean that tomorrow morning all African countries will join the bloc of countries that support Israel in any and every international forum. Diplomatic processes take time, and voting habits of years do not change in one day even after the exchange of ambassadors. Nevertheless, we should not underestimate Chad's importance and the possibility that good relations with it can help Israel.

Chad-Israel diplomatic steps (Photo: Amos Ben Gershom)
The visit by the president of Chad, which took place at the same time as an equally important visit by the Czech president, is further proof of the prime minister's impressive diplomatic abilities. Netanyahu is a statesman at a level not usually found here, and despite his known shortcomings, he really plays in another league in this respect. The talent with which Netanyahu navigates the Israeli ship through complex and complicated international situations must also impress those who do not necessarily support his political positions. Israel's position is improving in every aspect that can be measured numerically. However, precisely because of these diplomatic skills it is hard not to feel that there is a vacuum in leadership. In fact, both the on the Right and the Left there is no high-ranking statesman who can take the helm with the same talent as Netanyahu. So on the one hand, it's really good that we have Netanyahu, and on the other hand, the lack of a leadership alternative is certainly not a positive thing for the State of Israel.