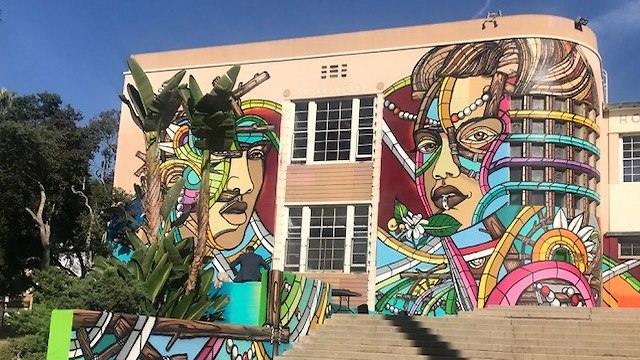 Graffiti in support of Israel spray-painted on LA high-school

An art project covering exterior walls of the iconic Hollywood High School was painted by a staunch Israel supporter and initiated by Consulate General of Israel in Los Angeles, and a pro-Israel advocacy organization Artists 4 Israel.

A giant graffiti meant to illustrate support for Israel was spray-painted on the walls of Hollywood High School in Los Angeles, an iconic institution attended in the past by many American film stars and musicians.

The artwork is an initiative of the Consulate General of Israel in Los Angeles, which, in addition to its diplomatic activities, is working to bring together LA's various communities. The project was completed in cooperation with, the City of Los Angeles, and the Los Angeles Police Department (LAPD), and Artists 4 Israel—pro-Israel advocacy organization that works through artists to educate people worldwide about Israel.

Pro Israeli graffiti painted on the outer walls of Hollywood High School (Photo: Artists 4 Israel, The Consulate General of Israel in Los Angeles)
The graffiti, located on the exterior walls of the school, was painted by David Sepulveda—known as Don Rimx—a Puerto Rican artist from Miami.

The consulate chose Sepulveda's work for the project since he is a staunch supporter of Israel, and has not only visited the country in the past, but even collaborated with Artists 4 Israel—which tries to operate as a strong countermeasure to groups such the Boycott, Divestment, and Sanctions (BDS) movement.

"His work speaks the design and cultural language of various communities," the project's organizers explained.

The Hollywood High School is more than 100 years old. It was attended by various American celebrities, including Sarah Jessica Parker, Bruce Lee, singer and actress Cher, Judy Garland, Ricky Nelson, John Ritter and many others.

Since the graffiti is painted on a building intended for preservation, the project required coordination between several local authorities.

Over the years, after the characteristics of the neighborhood have undergone a transformation, the school population changed as well. Today, it is attended by students from a low socioeconomic background, many of whom belong to the Latin and Afro-American communities.

The graffiti faces a busy road in the famous Hollywood neighborhood, not far from Hollywood Walk of Fame, and is seen by thousands of passersby every day.

In order to point out the connection between the artwork and Israel, the signatures of Artists 4 Israel organization and the Israeli consulate were added to the painting.

The city of Los Angeles awarded the Israeli consulate in LA a certificate of appreciation for its work on the project.

"This work celebrates LA's multiculturalism on which the city, as an immigrant society, is built, similar to the State of Israel," concluded Karin Eliyahu-Pery, Consul for Academia and Culture at the Consulate General of Israel in Los Angeles.