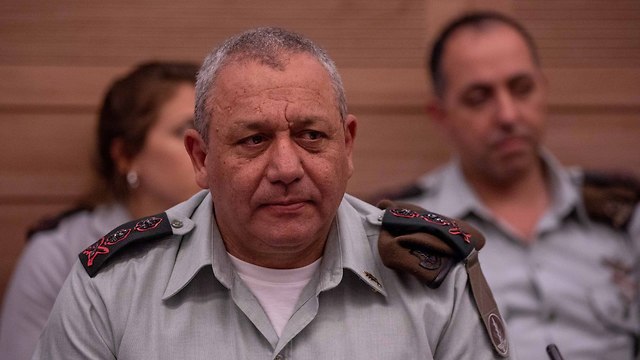 The IDF's enemies on the Right

Op-ed: The vitriolic narrative from the extreme Right aimed at IDF officers undermines and weakens the military, which is already experiencing hardship in retaining high-quality commanders.

During Gadi Eisenkot's tenure as IDF chief of staff, more than 1,000 secret operations were carried out across the borders of Israel. He drew the political echelon to an offense-based policy in the North, mainly in Syria, and often really pushed the envelope. But all this is not sufficient in the eyes of the pundits on the extreme Right, Israel's alt-right.

In two or three months, they will focus their sights on the incoming chief of staff, Aviv Kochavi. He will be their next "coward," the "weakling," the leftist, the commander behind the military advocate general, Sharon Afek, "who frightens our soldiers more than Hamas' Yahya Sinwar." Kochavi's fate will be even worse than that of his predecessor's. He will be burdened with the fact that his wife works for the State Attorney's Office.

A new genre has developed on the lunatic Right, a narrative full of scorn and threats. They accuse the IDF chief of staff, the Military Advocate General and the IDF Spokesperson Ronen Manelis of "sacrificing our soldiers on the altar of leftism and false morality."

One can find an illustration of a military gravestone with the inscription: "Killed because his life was less important than the life of the enemy." Or a tweet: "During the Second World War, (Soviet leader Joseph) Stalin set up units that shot in the back soldiers who were afraid to charge and attack—in Israel, Eisenkot appointed the Military Advocate General to shoot at soldiers who shoot terrorists." Another example: "Sharon Afek, don't you dare extend your hand to harm our soldiers, you will be met with an ancient and awesome people, who will show zero tolerance to those who bode us evil."

Aviv Kochavi (Photo: IDF Spokesperson)
They insolently lament that the IDF has ceased to win. The IDF ceased winning once it transformed from the Israel Defense Forces to the Settlers Defense Force. Since it began arresting wanted suspects—more than 4,000 in the past year—and stopped training and being a powerful maneuverable force. On one occasion, the chief of staff revealed that 55 percent of the IDF's activity is in the territories, and 75 percent of that is related to the isolated settlements outside the separation barrier and the unauthorized outposts. I once asked one of the Central Command generals to describe his schedule. At the end of the description I told him: This sounds like the schedule of a transportation coordinator, not a military commander. Yes, he sighed, pointing to the government offices. Until the Six-Day War, few army companies secured the borders. There were only eight companies on the front lines with Egypt, Jordan, Syria, and Lebanon. All the others were training for the event of a war. Today, the number of units guarding the territories is at least a dozen times larger. Then, before the occupation, there was a sharp distinction made in favor of preparation versus preparedness. Yitzhak Rabin understood this well: "We will not be able to sustain the allocation of a company to accompany a few children to flute lessons," he said. The late Ariel Sharon, at the end of his life, understood this equally well and was determined to do more.

Ofer Winter (Photo: Motti Kimchi)
According to a study by the Adva Center, from the first intifada that erupted in late 1987 and until 2015, the army's budget for "increased activity in the territories" amounted to NIS 56 billion. We are not talking about the Shin Bet or the Ministry of Public Security, but rather a dedicated budget for the IDF for activities in the territories. A special military jargon was invented for this purpose: Batash, the war between wars, low-intensity warfare. The Ministry of Police, which became the Ministry of Public Security, was forced to look to east Jerusalem and the West Bank and turn its back on residents of the Green Line. A large portion of its budget goes to prevent terror attacks and less to criminal activity. Combating traffic accidents, protecting people and property, dealing with organized crime and public corruption—all of these fall to the wayside, behind the war on terror. Serving in the territories is a source of deep moral dilemma for those with a conscience. The stark blitz of the right-wing loudmouths adds to it. According to data from the IDF's Behavioral Sciences Department, there is a growing difficulty in keeping high-quality commanders in the IDF, and the reservoir from which Eisenkot or Kochavi, Nitzan Alon or Yair Golan, can be recruited is drying up. The internet trolls want to leave us with officers the likes of Ofer Winter, who is a good officer, but his rhetoric on the war against "the enemy who oppresses and disgraces god" will not save us, because our enemies, the army of Muhammad, have a thousand Winters of their own.