Diploma given to one of the suspects from an Armenian medical school
Photo: Israel Police 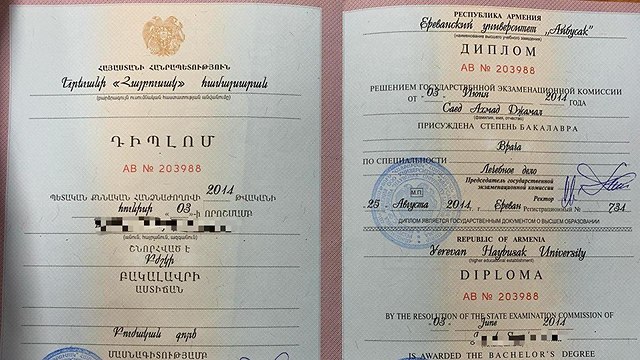 Police arrest 40 doctors, medical interns and pharmacists from the Arab sector on suspicion of presenting false diplomas from medical schools in Armenia in order to receive an Israeli medical license, even though they did not finish their studies

The Israel Police arrested 40 doctors, medical interns and pharmacists from the Arab sector early Sunday who are suspected of presenting false credentials to the Health Ministry.

The suspects allegedly presented diplomas from universities in Armenia, even though they did not complete the required studies there, in order to receive medical licenses in Israel.

Early on Sunday morning, police raided the suspects' homes across the country—from the Bedouin town of Lakiya in southern Israel to the Druze town of Majdal Shams in the north.

Diploma given to one of the suspects from an Armenian medical school (Photo: Israel Police)
Some of the suspects work at hospitals—including the Barzilai Medical Center in Ashkelon, the Kaplan Medical Center in Rehovot, and the Yitzhak Shamir Medical Center (formerly Assaf Harofeh)—while others work at other public institutions. The police investigation was launched at the request of the Health Ministry after it received an anonymous complaint about the matter from a man who presented himself as a doctor.

The investigation found that the suspects studied medicine in different institutions abroad—including in Jordan and Italy, among others—but failed to meet the requirements to receive a medical certification.

Israeli medical license given to one of the suspects (Photo: Israel Police)
They turned to a middleman—who also did not meet the requirements to graduate med school—who sent them to several academic institutions in Armenia: St Theresa Medical University, Yerevan Haybusak University and Mkitar Gosh Armenian-Russian International University. The suspects studied at those institutions for a short period of time, following which they received their diplomas without finishing the required studies. The police said the suspects, who knew they had a false diploma, presented it to the Health Ministry to receive a medical license in Israel. Some were even able to pass the accreditation exams and get public positions as doctors or medical interns at hospitals or other public institutions.

Leaflets advertising the Armenian med schools (Photo: Israel Police)
One suspect, a resident of Ar'ara in his 30s who works as a doctor at Barzilai, was arrested while he was on shift. During the arrest of another suspect from Tira, the suspect's father was caught fleeing the scene with two firearms. A third suspect, a dentist who has his own clinic, previously served a prison sentence for security-related offenses.

Police also seized leaflets in Arabic saying, "We happily announce to students having trouble completing their studies the option of transfer to a university in Armenia or Georgia without losing years. Career retraining from natural treatments and physiotherapy... to general medicine or dentistry." The ad also included contact details.

Most of the suspects will be brought in front of a judge Sunday for a remand extension.