IDF soldiers meet with children near the Gaza border ahead of Hanukkah
Photo: Haim Horenstein 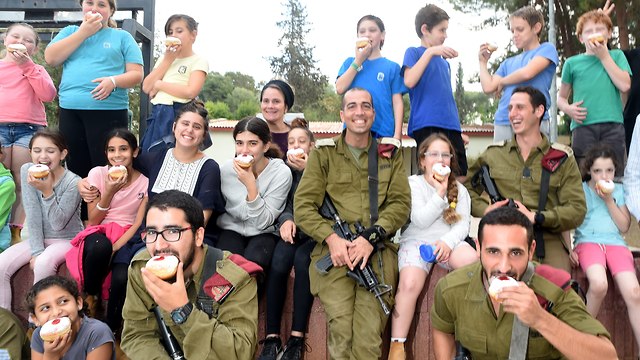 Poll, conducted by Jewish People Policy Institute, finds that most Jews in the country light the Hanukkah menorah and consume sufganiyot during the holiday, while American Jews view the festival as one of the most important Jewish holidays.

Most Israeli Jews observe Hanukkah traditions, with some 73% lighting the Hanukkah menorah all throughout the festival, according to a new survey conducted ahead of the holiday.

The survey was conducted by the Jewish People Policy Institute (JPPI) as part of an Israeli-Jewish research project headed by the journalist Shmuel Rosner and Tel Aviv University Prof. Camille Fuchs.

The survey of 3,000 participants found that one out of every four Israelis (27%) lights Hanukkah candles only during some nights of the holiday, while most Jews in the country (79%) can't resist sufganiyot.

IDF soldiers meet with children near the Gaza border ahead of Hanukkah (Photo: Haim Horenstein)

In addition, the JPPI poll found that 64% of Israeli Jews present their children with Hanukkah gifts (with most of them being of Haredi background), and 42% attend Hanukkah-related events.

The survey also examined whether American Jews celebrate Hanukkah, with its results indicating that 68% of US Jewry consider the festival of lights as one of the three most important Jewish holidays (compared to only 38% of Israeli Jews).

Nevertheless, the survey found that only 60% of American Jews follow the tradition of lighting the Hanukkah menorah.

Meanwhile, the 202nd Paratroopers Brigade and their battalion commander, Lieutenant Colonel Ran Friedman, met with children living in Israeli communities near the Gaza border in order to wish them a happy Hanukkah amid the ongoing tension in the south.

The meeting was also attended by the security coordinator of the Sha'ar HaNegev Regional Council, Eyal Hajbi, and the children's counselor, Aviv Alperin.