Profile of Arab-Israeli woman sentenced to death by Hamas 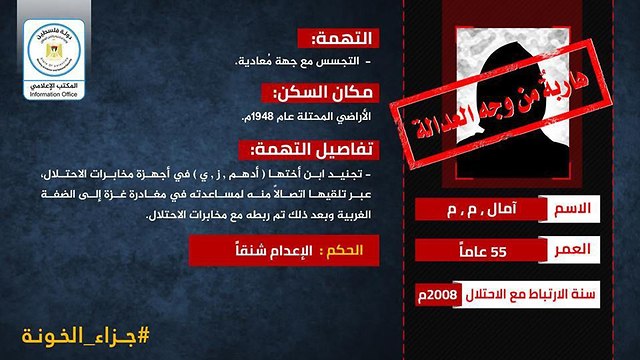 Hamas-controlled military court sentences a 55-year-old woman, Amal, to hanging in absentia for allegedly helping recruit her nephew to Israeli intelligence services, as part of the terror group's campaign against Israeli collaborators.

Hamas claims that a 55-year-old Israeli-Arab woman is one of six people sentenced to death by a military court in the Gaza Strip for allegedly collaborating with Israel, as part of the terror group’s continued “anti-collaboration” campaign against Israeli informants.

The woman, named “Amal," is not a Gaza resident and was sentenced to hanging in absentia for helping to recruit her nephew, who lives in the strip, to the Israeli intelligence service.

On Monday, the Interior Ministry in Gaza held a press conference announcing that eight additional defendants had been sentenced to life in prison by the Hamas-controlled court.

Profile of Arab-Israeli woman sentenced to death by Hamas

This morning, the organization's security apparatus said that according to the indictment filed against the woman, Amal's nephew, “Adham,” had asked her to help him leave Gaza and move to the West Bank, prompting the 55 year old to connect him to one of the Israeli intelligence agencies in order to guarantee him a safe passage.

The Hamas-run Interior Ministry has published a list of punishments for collaborators, according to which, anyone accused of supplying arms to the enemy will be executed.

In addition, those who are accused of providing information or documents that may undermine either the group’s military activity or security facilities will also be sentenced to death. "We call on the collaborators to recalculate their actions, because justice awaits them. The latest sentencings are a clear message to the informants, because this is their fate and its unavoidable,” stressed the Interior Ministry’s spokesperson at the press conference. “They must understand that Israel will not be able to defend them," the spokesperson emphasized.