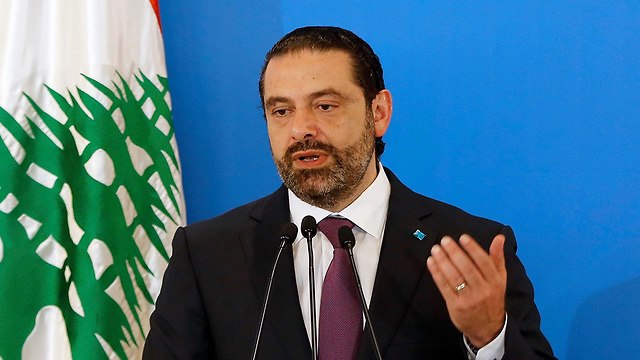 Lebanon: 'No reason' for military confrontation with Israel

Lebanese Prime Minister Saad al-Hariri said Wednesday there is no reason for a military confrontation with Israel despite the IDF's Operation Northern Shield to destroy Hezbollah terror tunnels along the Israel-Lebanon border.

"The Lebanese government is fully committed to UN resolution 1701, to the cooperation and coordination between the authorities in the two countries and the international emergency forces,” Hariri said in a statement.

“The Lebanese army is the one authorized to ensure peace on the borders,” the Lebanese leader said. “The government is committed to protecting the country’s sovereignty.”

On Tuesday, a tripartite meeting was held between the IDF, UNIFIL and representatives of the Lebanese military in the area of Naqoura/Rosh HaNikra on the Israel-Lebanon border.

"During the meeting, the Israeli team presented the evidence of the terror tunnels that were discovered,” said the IDF Spokesperson’s Unit.

Hariri stated that during the meeting the Lebanese representatives expressed their opposition to “the continuing violations” of the country’s borders.

“The Israeli side violates Lebanon's airspace and maritime border … this is what the Lebanese representatives emphasized at the meeting,” he stressed, adding, “The government will continue to monitor the matter in cooperation with the relevant parties in the UN Secretariat and the Security Council."

However, the Lebanese prime minister refrained from addressing the discovery of the terror tunnel network, while officials in the Lebanese army rejected the IDF’s claims and demanded to be provided with the exact location and coordinates of the underground terror infrastructure.

The IDF's Northern Command said they have enough intelligence and operational information regarding the location of all the tunnels within 120 meters from the Israeli border, but the military cannot guarantee that all of them will be exposed.

"Hezbollah has lowered its profile since the surprising and embarrassing discovery," a senior Northern Command officer explained.

“After we complete the task, we don’t intend on building an underground wall like we are doing in Gaza to stop tunnel digging, therefore the operation might last not weeks but months, and we are prepared for it,” the officer added.

The opening of one of the terror tunnels (Photo: IDF Spokesperson's Unit)

On Tuesday, the IDF Spokesperson’s Unit released footage of two Hezbollah terrorists running away from a surveillance camera planted by the IDF inside one of the tunnels, as the camera—which had explosives attached to it—blows up.

“For years, Hezbollah and Hamas invested huge sums and efforts in building tunnels and concealing them. Well, the army is methodically, calmly, and decisively dismantling this weapon," said Prime Minister Netanyahu at the onset of the operation.

"The operation is due to last several weeks and will be led by the head of the IDF Northern Command, Maj. Gen. Yoel Strick," said IDF Chief of Staff Gadi Eisenkot, emphasizing the Cabinet approved the operation on November 17 when "conditions were ripe.”