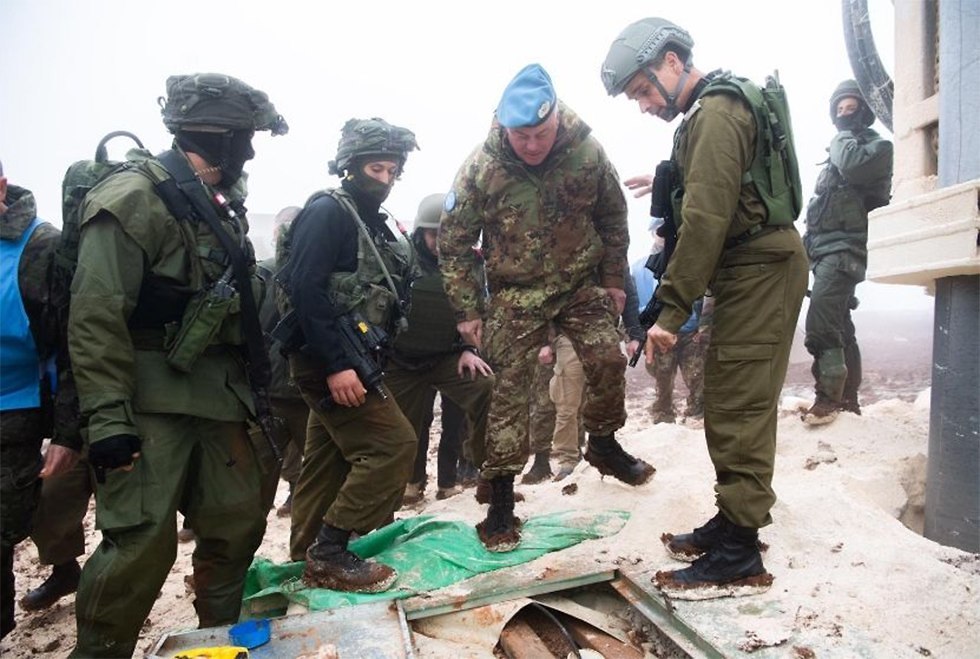 GOC Northern Commander Maj. Gen. Yoel Strick on Thursday gave the commander of the United Nations Interim Force In Lebanon (UNIFIL) a tour of the Hezbollah terror tunnel the IDF uncovered near Metula, and protested the violation of UN Security Council Resolution 1701 that ended the 2006 Second Lebanon War.

Maj. Gen. Strick presented UNIFIL commander Maj. Gen. Sefano Del Col with aerial photos of a group of houses in the Lebanese village of Ramyeh, where the IDF says there is another terror tunnel is crossing into Israel. Strick demanded UNIFIL to work in conjunction with the Lebanese army to investigate and neutralize the tunnel.

"We urge ... that UNIFIL take action together with the Lebanese armed forces to clear the area, clear the access to the tunnels and make sure that it is not used for (hostile) purposes against Israel," said Lt. Col. Jonathan Conricus, a senior military spokesman.

The UN peacekeeping force confirmed the existence of a tunnel near the "blue line" frontier between the two countries in a statement on Thursday, describing it as a "serious occurrence".

Israel this week launched an open-ended operation meant to expose and thwart tunnels built by Hezbollah aimed at infiltrating Israel.

The IDF said it "holds the Lebanese government, the Lebanese Armed Forces and United Nations Interim Force in Lebanon (UNIFIL), responsible for all events transpiring in and emanating from Lebanon."

Meanwhile, the IDF presented dozens of foreign military attachés, including the US, with information on Hezbollah's tunnel project.

The IDF stressed Operation Northern Shield will continue despite the winter weather. "We've prepared for that with suitable equipment, warm food and heating to the hundreds of soldiers who are part of the operation alongside civilian bodies," the army said in a statement.

"We continue with the effort of gathering intelligence about what's happening in Lebanon. Many Hezbollah members, including senior members, didn't even know about these tunnels," the IDF continued.

"I told the ambassadors that they need to unequivocally condemn this aggression against us by Iran, by Hezbollah and by Hamas, and of course, to also strengthen the sanctions against these elements," Netanyahu said.

Netanyahu also said he will demand the UN Security Council discuss the matter.

Lt. Col. Jonathan Conricus, a military spokesman, told reporters Thursday that the army is now operating in three areas where tunnels have been discovered.

"We are aware of additional tunnels," he said.

In Lebanon, the LBC TV posted an audio message that it said some residents of the border village of Kfar Fila received on their cellphones Thursday warning them to stay away from tunnels.

"Hezbollah is putting your lives in danger because of digging tunnels," said the Arabic audio message, which appeared to have been sent by Israel. "These tunnels could explode. Anyone who is close to the tunnels is putting his or her life in danger."