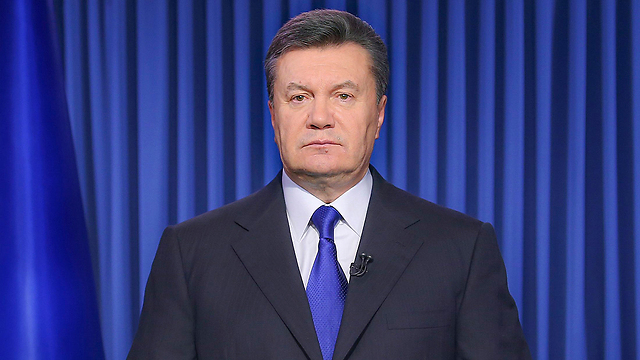 Chief military prosecutor in Ukraine says his country will demand Viktor Yanukovych's extradition if he arrives in Israel; issue will pose a political dilemma for Jerusalem, since Yanukovych is close to Russian President Putin.

Former president of Ukraine Viktor Yanukovych, who fled to Russia in 2014 and was removed from his post after being held accounteable for the Euromaidan demonstrations, during which 125 people were killed in clashes with the police, is seeking medical treatment in Israel.

Yanukovych, 68, was injured in mid-November while playing tennis in Moscow and was hospitalized for emergency treatment at a private clinic. His lawyer, Alexander Goroshinki, said he sought medical treatment in Israel, prompting Ukraine to demand his extradition.

Media reports about Yanukovych's request to be treated in Israel have triggered public outcry in Ukraine. Anatoly Matios, the chief military prosecutor in the country, said that if Yanukovych does arrive in Israel, Ukraine will seek his extradition.

"There is legal cooperation between the state attorney's office in Ukraine and the State of Israel. If Yanukovych arrives in Israel, we would be obligated to demand his extradition," Matios added.

Yanukovych is wanted by the Interpol and therefore rarely leaves Russia for fear of being arrested. It is safe to assume that before his possible arrival in Israel, he will seek assurance that the Israeli authorities will not turn him in to Ukraine. This could pose a political dilemma for Jerusalem, since Yanukovych's request would probably be backed by Russian President Vladimir Putin, who is close to the former president. The Ministry of Foreign Affairs said in response: "The Ministry is not aware of any request regarding Yanukovych's arrival in Israel."