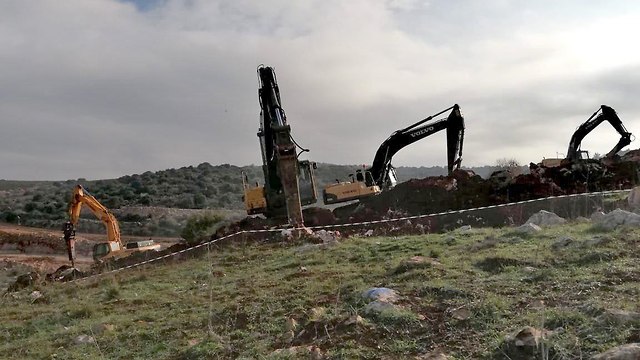 Terror organization publishes videos and photos showing IDF soldiers working along the Lebanese border, reporting on the locations of the troops and the tools they use, while the IDF distributes recording of the noise of tunnel digging.

The psychological warfare between Israel and Hezbollah intensifies as Operation Northern Shield enters its second week. The Shiite terror organization has been releasing footage of IDF troops operating in the Israeli enclave along the Lebanese border, while the IDF published Monday a recording of the sounds of tunnel diggings.

Hezbollah's media outlets take pictures and video of IDF soldiers and the engineering equipment they are using to locate and neutralize cross-border tunnels the terror organization has constructed along the Israel-Lebanon border, while elaborating on the location of the Israeli forces, the nature of their activity, the weapons they carry and the tools they use.

These reports, in addition to documenting Lebanese army activity along the border, are meant to send a message that even though Hezbollah has yet to officially comment on the operation, the Shiite organization is closely monitoring it.

Meanwhile, Hezbollah's spokespeople distributed a map detailing the exact locations the IDF forces are operating in.

The terror group also released a video showing IDF soldiers working during the night in the Kafr Kela area with the caption "The tunnels nightmare kept them awake."

Hezbollah releases video of IDF troops operating during the night

A reporter for the Hezbollah's Al-Manar TV channel posted a photo of an IDF soldier with the IWI Negev light machine gun bearing the caption: "I swear this is worth more than the FN MAG (machine gun)," in reference to the MAGs that were stolen over the weekend from the IDF.

Southern Lebanon's villagers were photographed near the IDF's operation sites, but there have been no clashes with the IDF or border-breaching incidents.

In an effort to show daily life in Lebanon continues uninterrupted by the IDF operation, an Al-Manar reporter posted photos of Lebanese residents having a picnic with media teams near the IDF's work sites.

Furthermore, a Hezbollah officer told the Lebanese newspaper Al Akhbar that "The enemy is not becoming weaker. However, those facing him are becoming stronger."

On Tuesday, Hezbollah released a video of an IDF robot operating near the tunnel stretching from Kafr Kela into Israel.

The video shows one of the soldiers pulling the robot out of an opening in the ground with a rope.

According to Hacohen, Hezbollah's activity again raises the question where the border between Israel and Lebanon really lies.

"We are stationed along the fence, as determined by the United Nations. The fence cannot exactly overlap with the border drawn on the map, since the terrain is rocky. Therefore, both we and Lebanon claim ownership over the same territory. Lebanon wants to see this as a cause for war," he said.

Speaking about the IDF's activity in the Israeli enclave along the border, Hacohen said that "Those enclaves posed a problem, since we manned our posts after the Israeli withdrawal from Lebanon in 2000."

"The Lebanese army is supposed to do its job on the border, but we see it is not only looking the other way, but also cooperating with Hezbollah," he explained.

"The IDF is very wise and acts with extreme caution. It seeks to conduct the operation with full legitimacy both from the Israeli society and the international community," he went on to say.

"As long as we act to protect Israel in its sovereign territory, the other side will be responsible if the situation escalates. It's very important to go into an escalation when it's clear to all who has the legitimacy and the right to defend himself," he stated.

Hezbollah's Secretary-General Hassan "Nasrallah is a very reasonable man and we can predict his next steps. However, a surprising turn of events is also possible, which can lead to an all-out war," Hacohen elaborated.

"Things can get out of control. The defense establishment is highly prepared for a controlled entry (into Lebanon-ed), and, in my opinion, is on top of things," he concluded.

So far, two tunnels crossing from Lebanon to Israel have been discovered, one of which near the Israeli town of Metula. The IDF is studying the tunnels before destroying them, among other things in an effort to determine whether their neutralization will require activity on Lebanese territory.

Meanwhile, fighters in the Yahalom special elite combat engineering unit are deployed in the area, operating seismic sensors that are transmitting data to the technological laboratory to analyze in an effort to find tunnels.

Last week, the IDF said the lab in the north is much bigger than the lab located in the Gaza Division, which over the past year and a half uncovered 17 Hamas terror tunnels.