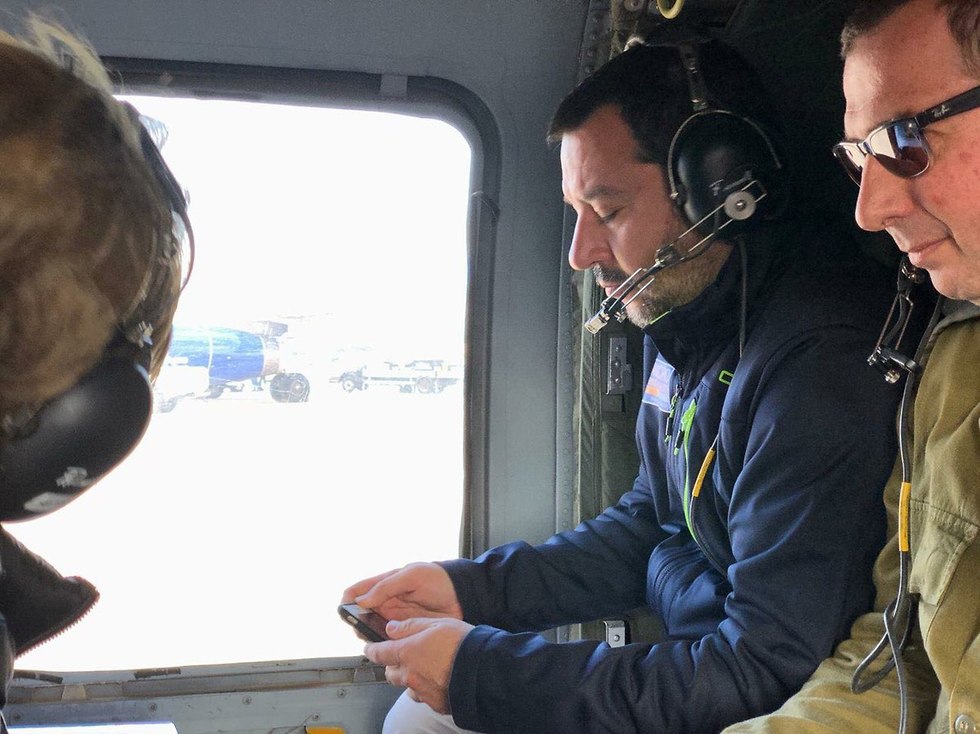 Criticism of Israel's support of far-right leaders is hypocritical

Op-ed: As Italian Deputy Minister Salvini arrives for a visit in Israel, many critics once again say that the country is pandering to the far-right extremists simply because of their pro-Israeli stance. The problem is that the same critics see no problem in seeing the Left pander to anti-Semitic and oppressive regimes in Iran or Venezuela.

Italian Deputy Prime Minister Matteo Salvini arrived in Israel on Tuesday. He is giving many another opportunity to accuse Israel of supporting extreme right-wing leaders who are infected with fascism and even anti-Semitism. But their complaints are tinged with hypocrisy. It is worth noting who it is they admire and who they choose to criticize.

Federica Mogherini, the EU's foreign minister, leads the effort for a nuclear agreement with Iran. The debate over that agreement is a legitimate one. The problem is that Mogherini became the defender of the Ayatollah regime. You’d be hard-pressed to hear from her a single word, condemning a regime that openly calls for the destruction of another country, a regime that engages in Holocaust denial, a regime whose involvement in the Middle East is causing great bloodshed, a regime that to this day is involved in terror activity on European soil.

Italian Deputy Prime Minister Matteo Salvini in Israel
She is not alone. Other European ministers visited Tehran, or hosted their Iranian counterparts, and German Foreign Minister Heiko Maas only recently explained why it was so important to protect European companies that are still conducting business with Iran. Although this is an anti-Semitic terror regime, business is more important. And not just politicians, popular western philosophers also offer support to murderous regimes. In the past it was Michel Foucault, who admired Ayatollah Khomeini—the leader of the Iranian Revolution, or Slavoj Žižek, an anti-Zionist philosopher who supports Iran getting nuclear weapons in order to undermine American hegemony. The late Venezuelan leader Hugo Chavez also enjoyed such support. His economic "reforms" led his country into one of the great economic and social catastrophes in recent times. Chavez said that "those who murdered Jesus hold most of the world's wealth." This did not prevent the international left from admiring this anti-Semite. They did not learn the lesson. Today they admire his British clone, Jeremy Corbyn, or his French counterpart Jean-Luc Mélenchon.

Gilad Erdan and Matteo Salvini (Photo: Yossi Zamir)
Now its Salvini who is reviving the debate over Israel's relations with far-right leaders, mainly from Europe. Salvini does indeed deserve criticism. There is one notable quote of his that can be interpreted as sympathetic to the fascist dictator Benito Mussolini, as well as other irritating statements. But by any fair measure, Salvini is a Righteous Among the Nations in comparison to the European politicians who pander to the Ayatollahs, or compared to Chavez and Corbyn. True, Salvini is also a vehement opponent of immigration. He is part of a trend currently overtaking Europe. He is no different than, for instance, Dutch Prime Minister Mark Rutte, who told immigrants in his country that "anyone who opposes our culture should leave us."

And no, there is no need to agree with all statements or actions of European leaders. But these statements are not a reason for a boycott, because if Salvini deserves to be boycotted, so does Mogherini and nearly half of Europe's politicians who support Iran.

Contrary to the numerous reports that the anti-Semitic Right in Europe is pro-Israel, in reality things are a little different. The Jobbik Party in Hungary, the Golden Dawn Party in Greece and the Svoboda Party in Ukraine are parties that proudly bear their common hatred for both Jews and Zionism. Their hateful rhetoric toward Israel is no different from the rhetoric of the extreme Left. Extreme movements on the Right deserve to be boycotted by Israel, similarly to Israel's boycott of Austrian Deputy Chancellor and leader of the Freedom Party Heinz-Christian Strache.

There is no need for a boycott against every leftist who expresses views that are critical of Israel, nor against every rightist who the Left labels a fascist. After all, Israel too is defined by the "forces of progress" in the world, and within Israel itself, as a fascist state. The same logic that demands boycotting Israel demands that many other politicians be boycotted for, among other sins, supporting Israel. They are against Salvini, but they revered Chavez and bestow a certificate of legitimacy to Corbyn, while continuing to visit Tehran. So yes, fascism shouldn’t be acceptable, but neither should be hypocrisy.