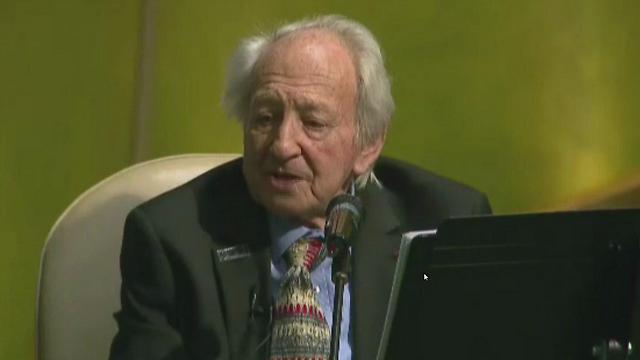 Veteran journalist who survived Auschwitz and two death marches was an international icon and prolific writer on World War II.

"I spent most of my life, 61 years to be precise, among the editorial staff of the newspaper. A Holocaust survivor who dreamed of immigrating to the Land of Israel and writing in a Hebrew-language newspaper—I succeeded," Klieger wrote.

"My grandchild is present in his white uniform; he serves in the Israeli navy," Klieger said at the start of his remarks."This is the first time that an Israeli soldier is sitting at the United Nations, and there are many thousands like him who ensure the continuation of our state."

Klieger told the General Assembly about the difficult times he experienced as a Holocaust survivor: "When I tell the story, people do not believe me. This chapter is not over. I'm in my 90s and I work for Yedioth Ahronoth. I was born as a journalist and I will die as a journalist."

"The only thing I could do in Auschwitz was to dream knowing that I could never realize them," he continued. "When I was in Auschwitz I had three dreams: the first was, of course, to survive this hell on earth, and I was convinced that I would not because no Jew was brought to this camp to survive, only a few.

"The second was that I would survive because I had to. My mission is to tell as many people as possible what the Nazis did to the Jews, and for 60 years I have been speaking in Israel and all over the world, I do not receive any payment in return. I have probably spoken thousands of times, from Sydney to Malta from Hong Kong to Denmark.

"My third dream was to assist the Jews regain their land from which they were expelled into exile. This dream was realized in Israel, our Jewish historic homeland. I am very proud that I have achieved all my dreams," he declared.

Klieger was born in 1925 as Norbert Klieger in Strasbourg, France, and was raised in Luxembourg and Belgium. During the German occupation of Belgium, he was active in the Belgian underground and underground cell of the Zionist youth movements transferring children through France to Switzerland.

He was arrested in 1942 by the Gestapo and sent to a transit camp, and in 1943 he was sent to Auschwitz. He survived two death marches and after the liberation of the camp and reunification with his parents, he decided to immigrate to Israel. He arrived in Israel on the famed illegal immigrant ship "Exodus." Onboard, he was part of the ship's crew and was one of the commanders of the battle against the British naval commandos.

Noah Klieger in his youth

Klieger joined Yedioth Ahronoth in 1957 and worked as editor of the sports supplement and the foreign news desk, as well as writing. He was considered an expert on the history of the Holocaust and World War II.

He published thousands of articles on the subject and covered the trials of Adolf Eichmann and John Demjanjuk in Israel, as well as the trial of the Auschwitz criminals in Frankfurt and the criminals of Majdanek and Treblinka in Düsseldorf. Over the years he headed dozens of Israeli delegations to the death camps in Europe and lectured around the world on Holocaust-related issues.

Klieger received many awards, including the Lifetime Achievement Award from B'nai B'rith and the Lifetime Achievement Award of the Association of Journalists in 2011. He was also awarded the French Legion of Honor with the rank of knight, the highest decoration awarded by France. In 2015 he received an honorary doctorate from the University of Haifa.

Journalist Shlomo Nakdimon, who worked alongside Klieger at Yedioth Ahronoth, paid tribute to his colleague: "He was a very diligent man, one of the symbols of Yedioth Ahronoth, and in my eyes he was even a Yad Vashem in the sense of commemorating the Holocaust. He was an eternal flame that could not be extinguished," Nakdimon said.

"He was a man who immortalized the Holocaust in the true sense of the word, because he was a Holocaust survivor who spoke out immediately," Nakdimon said.

Klieger is survived by his wife, Jacqueline, and two step-daughters. The youngest daughter, Iris Lifschitz-Klieger, is also a Yedioth Ahronoth journalist. She was informed of her father's death while in Rome trying to obtain a lifesaving remedy for him.

"I'll give it to someone else," Lifschitz-Klieger said after her father's death. "He was my adoptive father from the age of 4. He was a journalist in his soul, it was in his DNA. When asked to write an article for the anniversary of Yedioth Ahronoth, he was thrilled and when he reached the point where he could not even hold a pen or type, he did not give up and asked me to write for him… Yedioth Ahronoth was his second family for 61 years."

Below are a selection of Klieger's articles from over the years:

Klieger tells his tale of life inside a death camp, and gives an example of the daily struggles he had to face.

Let's face it, our neighbors are not like us

Klieger reflects on the differences between Israeli and the PA when it comes to enemies' families.

Klieger marvels at Turkey, where they know how to prepare all kinds of fish and seafood and cab drivers got their licenses in the circus.

Noah Klieger questions the prime minister's claim that the mufti of Jerusalem was the one who suggested that the Nazi leader burn the Jews, when more than one million Jews had already been massacred.