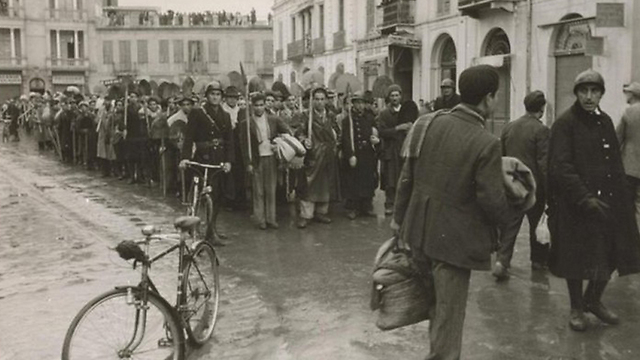 When the Holocaust reached Africa

After years of dodging the subject, the suffering of North African Jewry is finally out in the open; state institutions have started acknowledging the Maghreb survivors, sparking local curiosity —and some interesting initiatives.

It’s been 76 years since Nazi Germany started its hunt for Tunisian Jews—and only a short while since the tragedy of this community, and other North African communities, has begun to be acknowledged alongside the Holocaust that took place in Europe. In recent years, both Jewish and Muslim researchers have begun digging for information about the history of North African Jews. “No one talked about it, neither there nor here in Israel,” said Prof. Haim Saadon, of the Yad Ben-Zvi Institute and the Open University, who researches the heritage of these communities. “People said that, ‘there was less food and camps and anti-Semitic laws—but it can’t be compared to Auschwitz’. And they’re right.”
Victor Perez, Tunisia's youngest boxing champion, who was sent to Auschwitz
X

“However,” Saadon said, “this doesn’t mean we should forget what happened in communities where there wasn’t an annihilation. It’s a piece of the puzzle that’s missing, and the story of the Jewish people wouldn’t be complete without it. And the more we reveal about Jewish communities under Islam—there more we discover the importance of this piece of the puzzle.” Developments in this research field have also revealed shared Muslim-Jewish memories and histories, that have triggered North African filmmakers to address Maghreb Jewish heritage in a number of recent films. “Some people have important historical documents in their homes, and they aren’t even aware of it,” Saadon said, and encouraged people to share such documents. “Today people want to talk about the war in North Africa, and state institutions are legitimizing this talk and acknowledging some people as Holocaust survivors.”

The story of North African Jewry during the Holocaust is a diverse one. Tunisia, for example, was the only country that endured direct German rule, and Tunisian Jews were forced to wear the yellow stars worn by European Jews. Some 4,000 people from this community were put in concentration camps, alongside a general policy of humiliation and violence—including the murder of Jews in their homes and death by starvation, bombing and death marches.

Tunisians being sent to hard labor during WWII
Saadon stresses that Jews (and Muslims) under Mussolini’s Italian-occupied Libya were also victimized during the war. However, the local Libyan governor tried to minimize harm to the Jewish community, and indeed racial laws were implemented slowly and only partially. “Recently, a man who discovered his father’s journal from the Jadu concentration camp came and gave us this one-of-a-kind piece: the only written testimony from within the camp,” Saadon explained. “It’s incredibly valuable.” Muslim researchers are also trying to piece together the puzzle of what happened. “They’re interested in these materials. We want to translate the Jadu journal into Arabic, if we can get funding for it. If they (Muslim community) could only see how the local Jews empathized with their Muslim neighbors during the occupation. This kind of information can really bond people around shared memories,” said Saadon. Saadon tells of breakthroughs that came from Muslim researchers. “I have a Moroccan colleague who teaches in the US, and he found the journal of a Muslim man who lived around the camps in Alegria. We meet these researchers at academic conventions in Italy and France and exchange information and notes. Just recently we published a 700-page volume on World War II in North Africa, along with Muslim researchers.”

Prof. Haim Saadon (Photo: Ariel Zandberg)
Morocco and Tunisia especially, are interested in dealing with memories of WWII . Morocco, which was ruled by Vichy France, was subjected to discriminatory laws against Jews, who were removed from administration and state offices and banned from some trades and French schools. For now, Morocco and Tunisia are the only two Maghreb countries that are willing to discuss these events, according to Saadon. “During the National Holocaust Remembrance Day, a French film about the war was screened in Tunisia. Even if it had nothing to do with Jews, this is a huge thing—they chose this specific date to screen this film, when there used to be a general atmosphere of Holocaust denial in Arab countries.”

Of several recent North African films on the subject, one of the most outstanding is a film about Victor Perez, Tunisia’s youngest boxing champion who was sent to Auschwitz, where he became part of a “fight club” team lead by an SS officer.

“There are many local productions," said Saadon, “such as Le Chant des Mariées, (the Wedding Song) from 2008, a film that tells the story of the Jewish-Muslim relationship under the occupation through the story of two girls—a Muslim and a Jew. It’s a joint French-Tunisian production. Not an easy watch but it’s important."

“This is a new chapter. These stories fight Holocaust denial—they now see it as part of their story,” Saadon said.

“When we released a film in Arabic about the war, the responses we got where ‘why didn’t we know about this?’ There’s a generation of 30-40 year olds who don’t know the story of the Jewish communities that lived in their region and who were contributing citizens.

"Today they feed on a media that only talks about what Israel is doing to the Palestinians, but these memories of a shared history and shared suffering unites us."