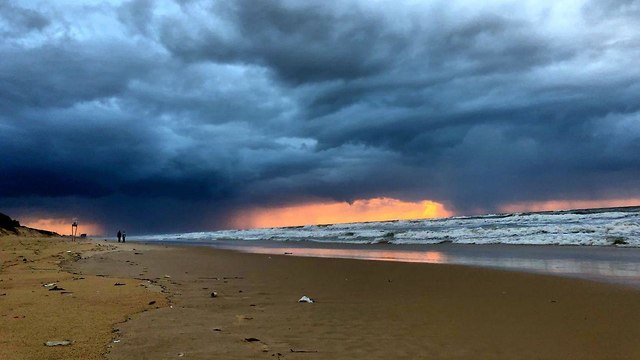 Winter is here: Israel hit by thunder, lightning and floods

Israelis found themselves in the center of a stormy period, as heavy showers accompanied by thunderstorms and strong winds hit Thursday morning. The inclement weather spread down from the northern parts of the country all the way to the south, with temperatures dropping to below average.

There were fears of flooding in the eastern parts of the country and in the Negev Desert, where meteorologists also predicted fog and mist.

Heavy rains in the north brought welcome news for the Sea of Galilee, one of Israel's main water sources. The lake's water level rose by 1.5 centimetres, according to the Water Authority, although it is still 1.58 meters below the red line and just 29 centimeters above the black line—that indicates at which point pumping could lead to permanent damage to the water quality.

On Mount Hermon on the Golan Heights, up to 10 cm of snow accumulated overnight for the first time this winter, accompanied by heavy fog, with the temperatures falling to -1C (30.2 F).

Heavy rains also hit the center of the country, bringing some flooding. A police station in the city of Rehovot, some 20km south of Tel Aviv, had to be shut down after it flooded.

According to the Meteo-Tech meteorological company, winds in the western Mediterranean Sea will reach speeds of up to 96.5 kph (60 mph), while the waves could reach heights of up to 400 cm (13 feet).

The storms will gradually weaken toward Thursday evening, but intermittent rain is expected to continue through Friday, mainly in central Israel and northern Negev.

On Saturday it will continue to be partly cloudy, and the temperatures expected to rise, with a chance of slight drizzle in the north and center of the country.