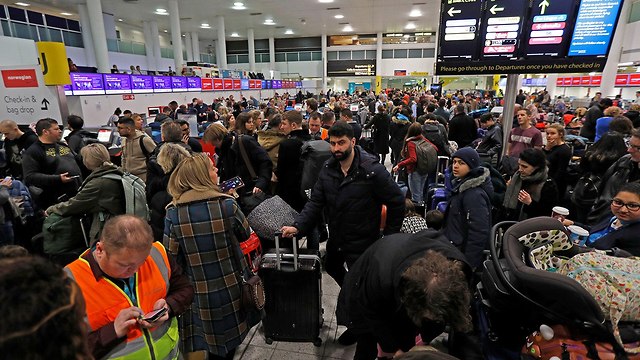 London Gatwick, the country’s second-busiest airport, was closed for more than 36 hours on Wednesday and Thursday after drones were spotted flying over its airstrip.

London Gatwick, the country’s second-busiest airport, was closed for more than 36 hours on Wednesday and Thursday after drones were spotted flying over its airstrip. More than 750 flights were canceled and 124,000 passengers were affected. The incident ended with no casualties or damage to property, but cost tens of millions of dollars to airlines and passengers.

Thousands of passengers were affected by cancellations (Photo: Reuters)

Cancelled flights (Photo: AP)
On July 30, the UK made it against the law to fly drones within 1 kilometer of an airport.

The British Army bought six of Rafael’s anti-drone system, marketed under the brand name Drone Dome, for more than $25 million in August, a spokeswoman for Rafael confirmed to Calcalist at the time. The British Army uses the systems in Syria to stop ISIS UAVs.

Rafael, one of Israel’s largest defense contractors, describes the Drone Dome as a system designed to detect, track and potentially neutralize drones flying in no-fly areas. The system has a detection range of more than 16 kilometers, and in some versions, it comes with a high-powered laser which can destroy drones. The systems acquired by the British Army did not include the drone destruction laser.

A Rafael spokesperson declined to confirm nor deny a Drone Dome system was used at Gatwick Sunday. No other airport had acquired or used the system to date, he said.

Just last week, a drone hit the bow of a Boeing 737 loaded with passengers in Mexico while landing in Tijuana.