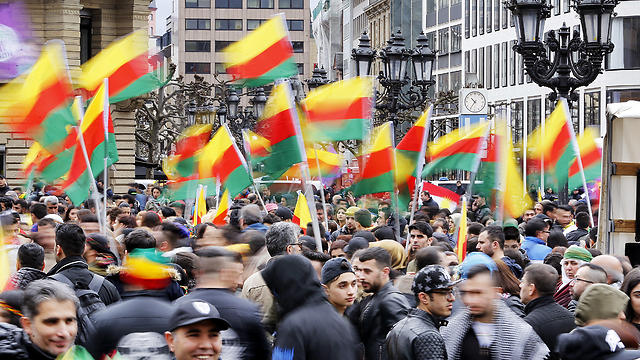 Erdogan is not a benevolent sultan of old, he's a monster that must be stopped

Opinion: The world has a strange double standard on the Muslim world - it's ok when they massacre their own, and the Turkish president is the master of it

Once upon a time, a Turkish sultan in situ was good news, such as those, for example, during the expulsion from Spain in 1492. The Sultan Bayezid II, who ruled 1481-1512, sent ships to Grenada to save the dispossessed Jews and invite them to live across the Ottoman Empire. Your loss, Bayezid tolds those who signed the deportation order, is our gain. And gain they did. The Jews were not only loyal, but also helped to develop the economy and spiritual life in every place they reached across the empire.

Life was not always good for the Jews under the Ottomans and/or the Turks. But what is very clear is that the current Sultan, Recep Tayyip Erdoğan, is an impudent anti-Semite. His repeated statements make it clear that his role model is former Iranian president Mahmoud Ahmadinejad, and not sultans of yore who treated the Jews fairly. This attitude of Erdogan's did not start today, or even with the 2010 Mavi Marmara crisis, when IDF troops and Turkish activists clashed on board a Gaza-bound boat with deadly results. When he was younger, Erdogan wrote a play called "Mas-Kom-Ya", which depicts a conspiracy by the Freemasons, the Communists, and the Jews.

Since 1984, Turkey has destroyed 3,000 Kurdish villages, implemented mass transfer of the local population and caused a "Kurdish Nakba" of two million people who became refugees in their own country. During this orchestrated war on the Kurdish people, there have been massacres during which 30,000 people were killed. Even if Israel made every effort, it could not scratch the surface of the horrors perpetrated by the Turks, not those of recent decades and certainly not those of the last century, including the genocide committed by the Turks against the Armenians, and the atrocities committed in the framework of the expulsion of Christians at the end of the First World War.

Erdogan himself is responsible for several massacres committed in recent years. For example, his soldiers raided the city of Cizre, in the northeast of the country, in February 2016. Hundreds of civilians hid in three basements, but it did not help them as Erdogan's soldiers massacred them mercilessly. A total of 178 people were killed, most of them innocent civilians.

And this is one of many events. The list of crimes is long, but the world barely pays heed with them, because the guiding principle is all too familiar: As far as Muslims massacring Muslims is concerned – the world is silent. Muslims are treated like stupid children, and allowed to get away with much. The unfortunate Muslims on the receiving end complain bitterly about this treatment, which is seen as a license to commit atrocities.

Erdogan has managed to raise this principle to new heights. He complains about Israel, which is fighting jihad, while he also supports this jihad; he has erased the gap (although it is doubtful this gap even exists) between anti-Semitism and anti-Zionism; he commits massacres against his own people, while accusing Israel of massacring the Palestinians.

Erdogan's anti-Semitic campaign continues with full force. Last year, Turkish TV aired an anti-Semitic series that included allegations of plots that were allegedly the brainchild the Jew Theodor Herzl, which were "inspired by real historical facts." This was not the first antisemitic series. In Turkey, it's routine.

One cannot easily dismmiss Erdogan, who in the past voiced opposition to Bashar Assad's continued rule in Syria, but soon joined the axis of evil that includes Iran and Hezbollah. There are those who argue that Turkey's economic interests will lead to restraint, but that's a mistake. History proves that leaders of Erdogan's ilk will pick ideological principles, especially those rooted in hatred, over national interests. Erdogan's Justice and Development Party is tied to the Muslim Brotherhood, whose founder, Hassan al-Banna, penned an article on the importance of the "industry of death." That's the idea, those are the principles that Erdogan follows.

It is important to note that the president of Turkey is not the enemy of Israel, he is the enemy of the free world. Europe already detests him; countries such as the Netherlands and Germany refused entry to ministers from his party. But this did not stop Erdogan from becoming the contractor for the project to stop the flow of refugees, for which he gets billions. This helps in the short term, but in the long run, Europe is cultivating a monster who is becoming increasingly racist and anti-Semitic.

Monsters like this must be stopped when they are small and toothless. But Europe has forgotten everything and learned nothing. And the monster continues to grow.