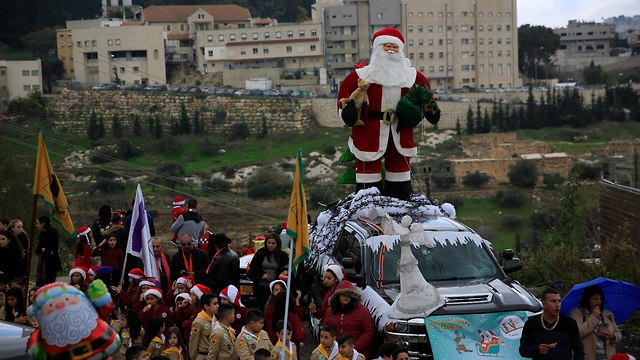 The Jewish state's Christian population celebrates the yuletide season along with thousands of Israelis and foreign tourists on the decorated streets of Nazareth and Jerusalem.

Israel's Christian population celebrated Christmas Day along with the rest of the world on Tuesday, accompanied by traditional processions, multiple Santa Clauses, family dinners and of course presents under the tree.

Maroun Abou Nassar, a local resident, said this year’s festive proceedings drew the largest crowds he’d ever seen. “The city is full of people, the hotels are at full capacity,” he said.

The Christian Quarter in Jerusalem’s Old City was also decked out in colorful Christmas decorations. David Parsons, the vice president of the International Christian Embassy Jerusalem, said Israel is the most exciting place for Christmas celebrations as it is the birthplace of Jesus.

Christians in Israel currently comprise some 172,000 of the general population, with 77% of them being of Arab origin. Most Israeli Arabs (some 71%) live in northern part of the country.