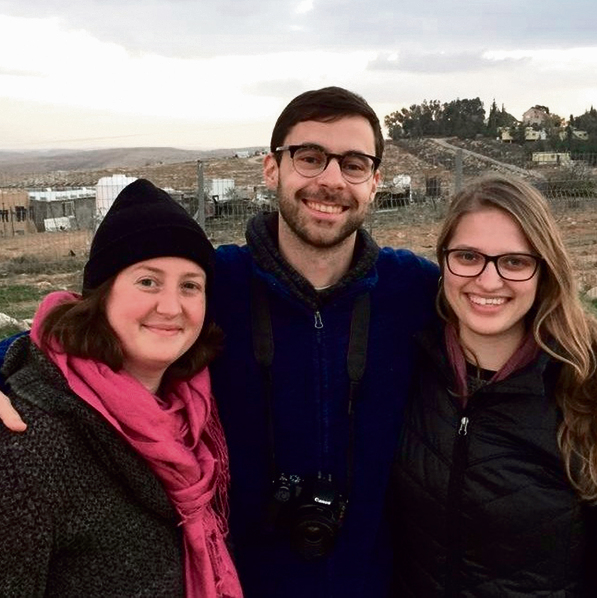 'We got kicked off Taglit for asking about the occupation'

3 American Jews say they were expelled from the project, which brings young members of the Diaspora to Israel, for arguing about the MIdeast conflict during a bus ride along the West Bank wall.

Three young Jewish Americans in Israel as part of the Taglit-Birthright project were expelled from the program this week for what they say were questions about the Israeli occupation of the West Bank and the separation barrier built in the area.

Shira Leah, Emily Bloch and Benjamin Dornberg, all 29, said the incident occurred on a bus ride along the separation fence. Questions they had raised about Israel’s West Bank barrier quickly escalated into an argument over the Israeli narrative. Following the incident, they were taken to Taglit-Birthright's offices in Tel Aviv, where they were told they could either return to the US, or give up their flight tickets back home and stay in Israel at their own expense.

The three youths are members of the Jewish Left wing organization, IfNotNow, which is already known for provocative actions on previous Taglit-Birthright's tours.

"Wow. I was just kicked off Taglit-Birthright Israel this morning, along with two other people, because when we drove past the border separation wall between Israel and the West Bank, we tried to ask questions about it and didn't accept his answer that the entire conflict is caused by crazy violent Palestinians," Shira Leah wrote on Facebook.

"I am devastated by Trump's policies of family separation, detention of children, and building a wall on the US-Mexico border because it goes against all of the values I was taught growing up in my Jewish community, where my mom was the Rabbi. It is unfathomable that I would be asked to stay silent when we see the same thing happening in Israel. Clearly this is a bribe, not a gift," she wrote.

According to Emily Bloch, other than telling her they violated the program's rules, the tour guide didn’t explain why they were being expelled from the program. "In their view, if you ask questions about the Occupation, you are no longer welcome," Emily said.

A day after the incident, the three youths visited the West Bank Bedouin village of Umm Al Khair, and launched a fundraising campaign to raise money for the purchase of plane tickets to the United States.

Sources at Taglit-Birthright Israel say that the incident was the result of a coordinated provocation. According to the organization, the activists kept asking unrelated questions and interrupting the tour guide. They also photographed the guide, even though they were asked not to.

"The three activists were asked to leave the group after aggressively disrupting the experience of the other participants, regardless of their political agenda. Taglit-Birthright Israel always welcomes participants’ views and questions, which are essential to the success of the experience, as long as they are shared in a constructive and respectful manner. We will not condone any coordinated plans to ruin the experience for others in order to promote a specific agenda," the organization said in a statement.

Since 1999, Birthright Israel has brought thousands of young Jewish youths, aged 18-26, to Israel. So far, more than 650,000 young adults from around the Globe participated in the organization's 10-day trips to Israel.

However, it has been reported that the number of participants expected this year have significantly dropped compared to previous years, especially among US participants. Officials from the organization attribute this decline to changes in registration requirements, and a growing sense of alienation among young Americans.