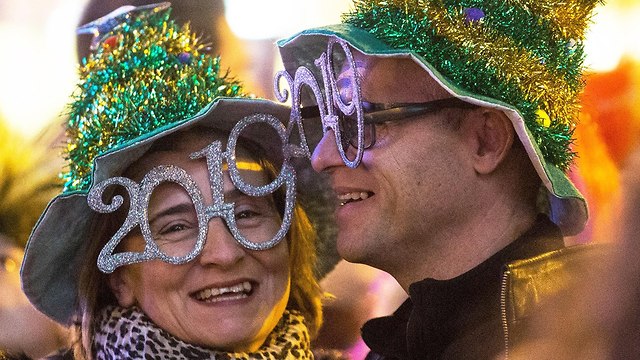 Fireworks, concerts, spiritual services and political addresses abounded to mark the transition to 2019, as revelers around the globe bid farewell Monday to a year filled with challenges to many of the world's most basic institutions, including in the realms of politics, trade, alliances and religion.

In Israel, hundreds of partygoers filled Rothschild Boulevard in Tel Aviv and welcomed the New Year with smiles and kisses. Francesco, a tourist from Milan, arrived in Israel specifically to celebrate the New Year. "We came here for six days, we visited Jaffa and the celebration here is fantastic: the atmosphere is crazy, the people are nice, it's very different from New Year celebrations in Italy."

Catherine and John from London, who came to Israel to visit John's grandmother, said that "it's fun to walk around the street and have a drink, everyone here is wonderful, Israel is wonderful and we don't see this enough in British press, perhaps will move to Israel after our trip to the East."

Countries all over the globe celebrated New Year's Eve in large celebrations, fireworks, music and dancing. First to welcome the new year was the Pacific island nation of Kiribati. The country greeted 2019 with church services and mostly quiet private celebrations after spending 2018 on the front line of the battle against climate change. Much of the nation's land mass, occupied by 110,000 people, is endangered by rising seas that have inundated coastal villages. The rising oceans have turned fresh water sources brackish, imperiling communities and raising doubts the nation will exist at the next New Year.

The first Western countries to welcome 2019 were New Zealand and Australia. An estimated million people crowded Sydney Harbor as Australia's largest city rang in the New Year with a spectacular, soul-tinged fireworks celebration.

One of the most complex displays in Australia's history included gold, purple and silver fireworks pulsating to the tune of "(You Make Me Feel Like) A Natural Woman," made famous by Aretha Franklin, who died in August. The show used 8.5 tons of fireworks and featured more than 100,000 pyrotechnic effects.

While many celebrated New Year's Eve with fireworks in Bangkok, hundreds traveled to Takien Temple in a suburb of the Thai capital to lie inside coffins in a traditional funeral ritual.

Participants believe the ceremony— symbolizing death and rebirth — helps rid them of bad luck and allows them to be born again for a fresh start in the New Year. They held flowers and incense in their hands as monks covered them with pink sheets and chanted prayers for the dead.

In the Philippines, dozens of people were injured ahead of New Year's Eve, when many across the Philippines set off powerful firecrackers in one of Asia's most violent celebrations despite a government scare campaign and threats of arrests. The Department of Health said it has recorded more than 50 firecracker injuries in the past 10 days. That is expected to increase as Filipinos usher in 2019.

Meanwhile, in China, New Year's Eve isn't widely celebrated since the Chinese lunar New Year in February is a more important holiday. But countdown events were held in major cities and some of the faithful headed to Buddhist temples for bell-ringing and prayers.

Beijing held a gala with VIP guests at the main site of the 2008 Summer Olympics. The event looked ahead to the 2022 Winter Games, which also will be held in the Chinese capital. Additional police were deployed in parts of Shanghai, where a New Year's Eve stampede in 2014 killed 36 people.

After the Far East welcomed 2019, it was the Middle East's turn to welcome the new year. In Dubai, Fireworks crackled at Dubai's Burj Khalifa, the world's tallest building, as hundreds of thousands of spectators gathered downtown to watch the spectacular display. The fireworks replaced last year's somewhat anticlimactic LED lightshow that ran down the facade of the 828-meter-tall (2,716-foot-tall) tower.

Elsewhere in the United Arab Emirates, the emirate of Ras al-Khaimah attempted to set a new Guinness World Record with the longest straight-line display of fireworks reaching 7.35 miles (11.83 kilometers).

Meanwhile, in Mosul, Iraq, people took to the streets to celebrate New Year's Eve, while in Aleppo, Syria, residents crowded the streets dressed as Santa Claus.

In Russia, New Year celebrations were intermingled with disasters as thirteen people were injured when a bridge collapsed in Moscow's Gorky Park during the performance of the Russian hymn. The Moscow mayor's office issued a statement saying that "no serious injuries" were reported.

In Paris, residents and tourists gathered on the Champs-Elysees to celebrate New Year's Eve under heavy security. Anti-government protesters from the yellow vest movement had issued calls on social media for "festive" demonstrations on the famous avenue.

Paris police set up a security perimeter in the area, with bag searches, a ban on alcohol and traffic restrictions. The Interior Ministry said Sunday that the heavy security measures are needed because of a "high terrorist threat" and concerns about "non-declared protests."

President Emmanuel Macron gave his traditional New Year address to briefly lay out his priorities for 2019, as some protesters angry over high taxes and his pro-business policies plan to continue their demonstrations in coming weeks.

In London, Britons celebrated with the familiar chimes of Big Ben, even though the world famous clock has been disconnected for more than a year because of a conservation project. Since New Year's Eve without Big Ben would be positively un-British, the UK Parliament announced last week that the clock's massive bell would sound to mark the New Year with the help of a specially built electric mechanism.

At the same time, in Germany, tens of thousands of people celebrated the start of 2019 at Berlin's Brandenburg Gate. The annual New Year's celebrations took place amid tight security, with about 1,300 officers deployed throughout the heart of the German capital and revelers banned from taking fireworks, bottles or large bags into the fenced-off party zone. Berlin police reported fewer incidents than in previous years.

In Brazil, More than two million people celebrated the new year on Copacabana beach in Rio de Janeiro. A 14-minute fireworks display ushered Brazil into 2019 only hours before far-right politician Jair Bolsonaro will be sworn in as president. Many Brazilians took a dip in the water and made their offerings to Yemanja, a sea goddess in the Afro-Brazilian Candomble faith.

In the US, crowds gathered in New York's Times Square for the traditional crystal ball drop and a string of star performances.

Pop singer Christina Aguilera pumped up the crowd, performing in a snow-white dress and coat while partygoers danced in their rain ponchos.

The celebration took place under tight security: partygoers were checked for weapons and then herded into pens, ringed by metal barricades, where they waited for the stroke of midnight.

The last to usher the New Year will be residents of American Samoa, where they will watch the traditional fireworks show.