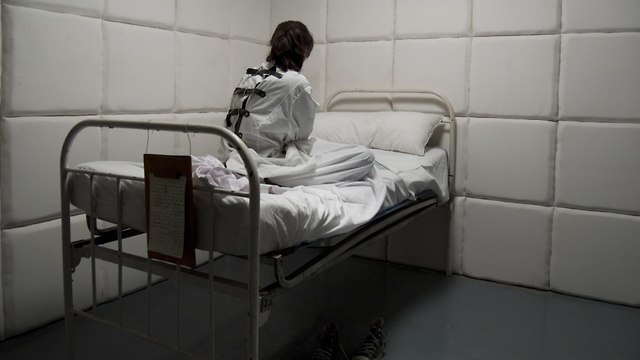 Woman suffers psychotic episode shortly after arrival, is treated at the Abarbanel Mental Health Center; but after treatment she was denied boarding on a flight home to California

A female tourist from the United States who arrived in Israel in October was hospitalized against her will at a closed psychiatric ward for two months because a guardian could not be found to accompany her on a flight home.

The woman, who suffers from bipolar disorder, was placed in the Abarbanel Mental Health Center in Bat Yam in central Israel two days after arriving in the country. Her requests to leave were denied and the hospitalization order was extended until mid-November.

Illustration (Photo: shutterstock)
In November, the woman was taken to Ben-Gurion International Airport, in order to fly home to California, but the airline refused to allow her to board without a guardian. Given that she did not have one, she was returned to the closed ward at Abarbanel. With the assistance of the Legal Aid Department at the Justice Ministry, the woman filed a lawsuit claiming her detention after returning from the airport was illegal. According to her claim, the professionals at the hospital did not believe that she posed a danger to herself and was only held against her will due to the lack of a guardian. “Had she been able to return to the U.S., the patient would have been released, according to the hospital," read the appeal filed against the hospitalization order. "Her hospitalization is without legal grounds, because despite her frustration when she was denied boarding, she was returned to the ward and her hospitalization continued forcibly despite there not being any behavior that justifies this." Tel Aviv District Court Judge Zion Kapach ruled that the woman does not belong in the psychiatric ward but that if she was released without any support network, and unable to fly home, she was vulnerable to falling victim to bad actors. He said that she must be allowed to fly home while acknowledging that she required the accompaniment of a medical worker which necessitates funding. In any case, he ruled, “it is unfeasible for her to continue to be held against her will only because of a bureaucratic problem.” Following her appeal, a doctor was found to accompany the woman on her flight home, after spending two months in an Israeli hospital.

The Health Ministry said in response that the hospital acted within the confines of the law while taking the individual aspects of the case into consideration.

“Lacking a medical confidentiality waiver by the patient, it is not possible to comment on a specific case. This is part of the duty to uphold the rules of medical confidentiality and privacy protection. An examination of the case shows that the hospitalization process was conducted according to the conditions specified in the law, while conducting periodic psychiatric committees as required, and both the hospital staff and the district psychiatric committee made their decisions based on the patient's condition.

"Although it is not the duty of the hospital or regional psychiatric committee to provide care for patients on their flight back to their native country, the hospital stepped up to the task and arranged a medical escort with the immigration authorities… All was done in accordance with the courts and its instructions."