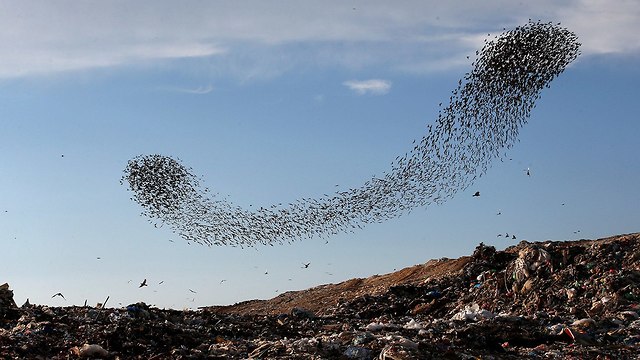 Dance with the starlings: Migratory birds swirl in Israel's skies

Flock from Eastern Europe puts on dazzling display of shapes near Be'er Sheva as they spend the winter in the Holy Land.

Starlings from Russia and eastern Europe soar through the sky in southern Israel, creating a display of shifting shapes and movements while spending the winter in the Holy Land.

The flock of starlings put on dazzling displays of shapes, resembling once a fish, now a giant whale, now a huge ball swarming across the skies.

Flock of starlings over Rahat
The murmurations—dark, shifting shapes that look almost like a ballet performance in the sky—awoke the otherwise silent desert, near Be'er Sheva, in southern Israel.

By grouping together, Tel Aviv University ornithologist Yossi Leshem told Reuters, the starlings not only find safety in numbers but their changing movements and shifting collective shape confuses would-be predators.