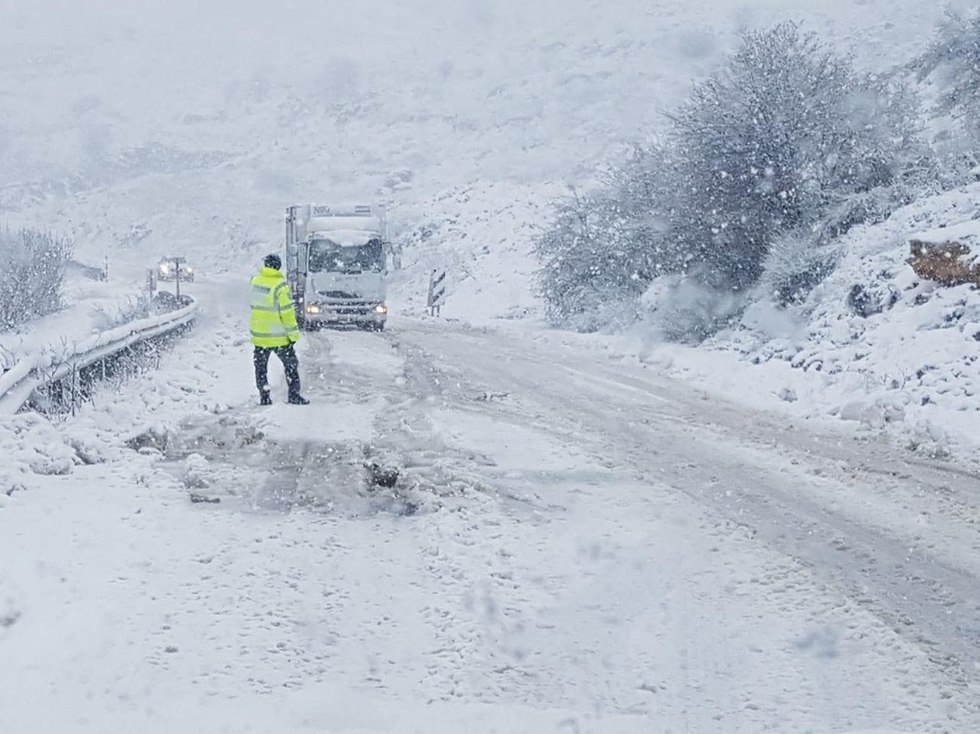 Flooding and snow in the north as Israel's stormy spell continues

Flooding shuts streets in Haifa area, while Mt. Hermon remains closed to visitors due to heavy snowfall; inclement conditions expected to end by Friday, when seasonal average temperatures will return.

The stormy weather that hit central and northern Israel continued Tuesday as floods led to several road closures in the north, especially in the area of the Gulf of Haifa and its suburbs. In Kiryat Haroshet, some 15km from Haifa, roads were closed due to the overflow from the Kishon River. According to the Water Authority, the river's flow rate was around 140 cubic meters of water per second.

The Mt Hermon site was to be closed to visitors for Tuesday and Wednesday due to inclement weather conditions. Some 70cm of snow have accumulated on the lower slopes and the snow continues to fall.

Heavy rains have hit across the north since the start of the storms on Saturday. The town of Ma’alot has had the most rain, with 120mm falling since Saturday. The Golan also saw heavy rainfall, with 113mm falling in some places, as well as in the Hula Valley (70mm), Ginosar on the shores of the Kinneret (66mm) and  Acre (81mm).

In the center of the country, Netanya saw 16 mm of rain, Tel Aviv saw 12mm and 10mm of rain fell in Jerusalem.

Katzrin Stream (Photo: Einav Bazaz)
The Water Authority reported that the Kinneret’s water level rose by 8.5 cm, the most for a 24-hour period, and while it now stands at 214.35 below sea level, it is still 1.35 meters below the lower red line. The lake needs another 5.55 meters to be considered full. Even all the recent rainfall has not been enough to make up for the last five years of relative drought.

Kishon flood (Photo: Israel Police)
The rain resulted in heavy flows in northern waterways. The Jordan River and the Tzalmon Stream, which flow into the Kinneret, both overflowed their banks.

Ma'ayan Zvi (Photo: Ofer Shinar)
The rain will continue to move south from the Galilee and spread throughout the center of the country Tuesday afternoon and evening. Snowfall is expected on the Galilee hilltops as well as on the higher mountains in the center of the country. Strong winds and below average temperatures are also expected in the center and south. Mediterranean Sea waves will be between two and five meters high.

Mt. Hermon (Photo: Hermon site)
Wednesday will be cold and rainy with snow on Mt. Hermon and possibly on the northern hills as well. The rain and winds will decrease throughout the day and are expected to calm by nightfall. Temperatures will return to the seasonal averages on Thursday. Friday will be partly cloudy with a slight temperature increase.