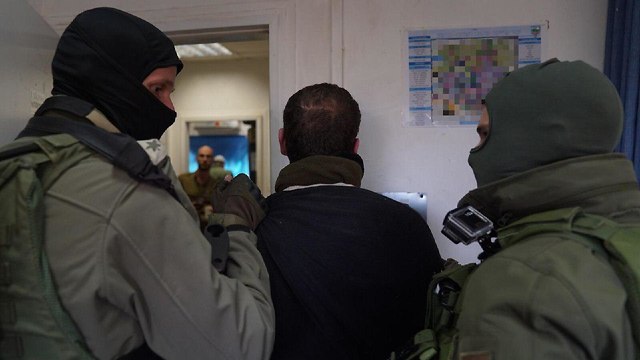 The Israel Defense Forces filmed the detention of As'am Barghouti , who is thought to have shot dead Sgt. Yosef Cohen and Staff Sgt. Yovel Mor Yosef last month at the Giv'at Asaf outpost.

The Israel Defense Forces filmed the detention of As'am Barghouti , who is thought to have shot dead Sgt. Yosef Cohen and Staff Sgt. Yovel Mor Yosef last month at the Giv'at Asaf outpost.

The Israel Defense Forces released on Tuesday footage of the arrest of As'am Barghouti, who is suspected of shooting dead two IDF soldiers and wounding another at the Giv'at Asaf outpost in the West Bank last month. He is also suspected of involvement in the terror attack outside of the Ofra settlement that led to the death of a baby whose mother was wounded in the attack while she was heavily pregnant with him.

As'am Barghouti was arrested in a joint operation conducted by the Shin Bet domestic security services, Israel Police and IDF forces, following a month long manhunt for the suspect. Barghouti’s brother, Saleh, was killed during an IDF operation two days prior to the Giva'at Asaf shooting, after it emerged that he had also been involved in the attack near Ofra Junction that left seven people wounded, including the 21-year-old pregnant woman who was seriously hurt.

The footage showed the security forces' activity in the Binyamin Regional Division. Over the past few weeks, the forces deployed in the division detained dozens of Palestinians as part of their weeks-long manhunt to capture the terrorist.

Last month's attack claimed the lives of Sergeant Yosef Cohen and Staff Sergeant Yovel Mor Yosef, who had been gunned down by Barghouti, who exited his vehicle and opened fire on soldiers and civilians standing at a bus stop at the Asaf Junction near the outpost.

Earlier Tuesday, Prime Minister Benjamin Netanyahu congratulated the security forces on successful operation to detain the suspect. “Israel will bring to justice all those who harm our citizens," he said.

Barghouti was arrested at the house of one of his accomplices in a West Bank village, and was making preparations to carry out similar attacks, according to the security forces that apprehended him, citing the fact that a Kalashnikov rifle, massive amounts of ammunition and night vision equipment were located at the scene of the arrest. Due to the swift nature of the arrest, the suspect did not resist or attempt to use the weapons at his disposal.

“The arrest, carried out by the Shin Bet and Border Police's counter terrorism Yamam unit, is the culmination of the intelligence activity that began immediately after the attack,” said the Shin Bet in a statement.

As'am Barghouti
The fact that the suspect was captured alive will assist the intelligence services in locating those involved in at least two attacks involving the Barghouti brothers.

The commander of the Yamam police special forces unit involved in the arrest said: "We never doubted we would get Barghouti and put him behind bars. The Yamam's cooperation with the various security forces, including the Shin Bet, led to a series of operational successes. No despicable terrorist can escape the long arm of the Yamam."

The head of the Beit El Regional Council in the West Bank, Shai Alon, expressed his gratitude to the security forces.

"I thank all those who worked around the clock to capture the Giva'at Asaf terrorist. All those who seek to harm us should know it is impossible to hide from the police, the Shin Bet and the IDF. Nevertheless, we reiterate our warnings of potential additional terror attacks in our area, requesting the political and security officials to do everything in their power to protect Beit El 's residents," Alon said.