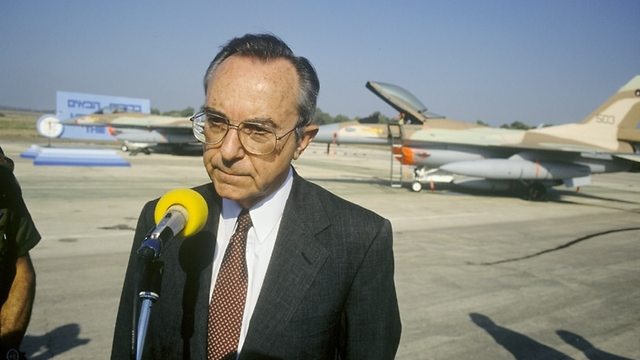 Moshe Arens, defender of the state

Analysis: From engaging with Saddam to trying to build the first Israeli fighter jet, the late engineer-turned-politician doggedly devoted his life to preserving the Jewish state and its dignity.

Moshe Arens did not fear to try new things. Even in the face of a bitter enemy such as Iraqi strongman Saddam Hussein. In November 1983, Arens, then Israel’s defense minister, sent a letter to Saddam, via US Special Envoy to the Middle East Donald Rumsfeld. Rumsfeld reported that Saddam paid no attention to the letter.

Asked whether it was reasonable to expect Saddam to respond to an Israeli overture only two years after Israel bombed Iraq's nuclear power plant, Arens responded that “they say that Iraq is undergoing a change and I figured it can’t hurt to try.”

In 1990, Arens, together with the head of Military Intelligence Directorate, Amnon Lipkin-Shahak, and the Mossad chief at the time, Shabtai Shavit, flew to Washington to consult with then-US defense secretary Dick Cheney. Arens brought with him a dossier containing new information on Iraq’s rapid progress in enriching uranium using centrifuges.

At the time, the US was intent on bringing Iraq closer to the West, and Cheney said the detailed information as requiring further assessment. But shortly afterwards, Iraq invaded Kuwait. Two years later, then-Israeli defense minister Ehud Barak declared that “international inspectors in Iraq revealed startling information, especially with regards to its nuclear effort —technology to separate and enrich uranium.” During the late 1980s, I accompanied Arens during a period which was for him both filled with joy and sorrow. As the chief engineer for Israel Aerospace Industries, many of Aren’s engineering students from the Technion participated in the production of the first Israeli fighter aircraft, the Kfir.

Kfir aircraft sold to Columbia (Photo: IAI)
Following the French embargo on providing Israel with military aircraft, Arens, as ambassador in Washington, managed to convince the US administration and Congress to allow Israel to use a quarter of a billion dollars of US military aid for the production of the Lavi jet fighter. After being appointed minister of defense, Arens obtained authorization to use US technology in the project and his students participated in the project as well. The Lavi project progressed swiftly and two prototypes were built proving it promising. Arens believed that Israel was on its way to producing one of the world’s most advanced aircraft. But then the Israeli government decided to cancel the project, in large part due to pressure by then-US defense secretary Casper Weinberger. According to Arens, Weinberger did not view favorably the possibility that Israel would achieve independence in such a decisive field, and he was supported by officials in Israel who were skeptical of the state’s ability to complete the project. The decision to cancel the project passed with a majority of one vote. Arens decided to resign, reasoning that all ministers are responsible for a government decision. Arens felt that he was fulfilling the Talmudic saying that, “When one who relinquishes his dignity, his dignity does not forgive.” He saw the cancellation of the Lavi project as a surrender of Israel’s dignity, and he would not and could not be associated with that.

Instead, Moshe Arens became an ordinary MK and led the Likud’s next election campaign, his own dignity intact.