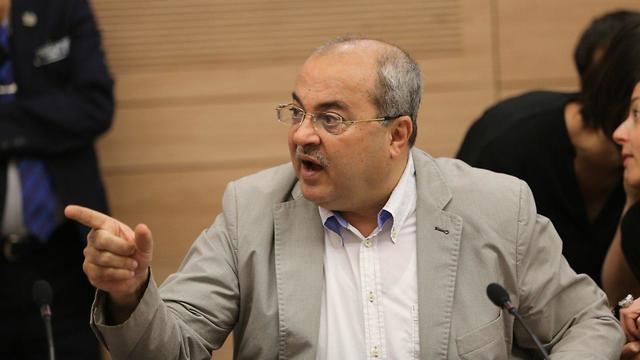 After his request to split party from the Joint List, 47% of respondents say Ahmad Tibi should lead the faction, more than double number of respondents supporting Ayman Odeh; most voters express dissatisfaction with Joint List

Most Israeli Arabs prefer to see veteran Knesset Member Ahmad Tibi leading the Joint List Party, with 47% saying he is the most suitable candidate for the job, while just 20% said they would like to see Hadash MK Ayman Odeh taking the reins, according to a recent survey published by Yedioth Ahronoth.

In addition, 46% of Arabs who are eligible to vote expressed their dissatisfaction with the Joint List during its last term, while 42% said they are pleased with the party.

The Joint List, which formed ahead of the 2015 elections and earned 13 Knesset seats, comprises Arab Renewal, Hadash, Balad and the United Arab List. The four parties united in the wake of a decision to raise the threshold for entering the Knesset, in order to preserve the Arab presence in parliament.

On Tuesday, Tibi announced he is seeking to remove his Arab Movement for Renewal Party from the Joint List. His request for the split was approved on Wednesday by the Knesset House Committee.

After splitting from the Joint List, 43% said they would vote for Tibi's Arab Movement for Renewal, as opposed to the list comprised of Odeh's Hadash, Balad and the United Arab List, which received 38% of the vote.

The survey was conducted by Dr. Mina Tzemach and Mano Geva from the Midgam Institute, among 502 respondents who constitute a representative sample of eligible Arab voters in Israel.

"The poll's results are certainly surprising, and may change the public agenda in the Arab society," Ihab Kadah, head of research in the field of Arab society in the Midgam Institute, said.